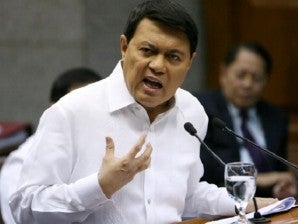 MANILA, Philippines–With the party now unsure about the chances of a certain member running for president in 2016, will Nacionalista Party president Manuel “Manny” Villar Jr. step up and agree to run again?

After a disappointing loss in 2010 where he had mounted a much hyped and costly campaign to be president, Villar has kept a low profile, focusing on running his real estate empire.

“So far, he has no plans yet,” said Villar’s spouse, Sen. Cynthia Villar, in a recent interview when asked if her husband would be taking another shot at the presidency.

Manny Villar is chair of real estate firm Vista Land and Landscapes Inc., which has ventures in retailing, malls, hotels and condominiums.

After seeing his ratings tumble from 5 percent to 1 percent in a September Pulse Asia survey of voters’ preference for presidential candidates, NP member Sen. Alan Peter Cayetano has said he was no longer sure he would run for president.

Party mate Sen. Antonio Trillanes IV, who had also expressed a desire to run for higher office, has said he was “leaning” toward Manny Villar as the party’s standard-bearer in 2016.

Trillanes, however, conceded that Villar appeared reluctant to run because he was “doing well in business.”

And another party mate, Sen. Ferdinand “Bongbong” Marcos Jr., should not be counted out.

Trillanes said the party would have to draft criteria for choosing its standard-bearer.

He said the NP would decide if it would field a candidate or coalesce with another party by the middle of next year.

But after the experience of her husband, Sen. Cynthia Villar believes becoming president is destiny.

Manny Villar mounted an expensive all-out campaign for president in 2010, going toe to toe with candidate Benigno Aquino III in the surveys.

But in the end, he landed third behind Aquino and ousted former President Joseph Estrada.

The national outpouring of grief after the death of former President Corazon Aquino in August 2009 translated to calls for her son, then a senator, to run for president.

The groundswell of support translated to 15 million votes for Aquino, who won by a huge five-million vote margin over his closest rival, Estrada.

In a phone interview, Cayetano clarified that he had not ruled out a presidential run.

He said that after the Senate blue ribbon subcommittee wraps up its inquiry into the allegedly overpriced Makati City Hall Building II, he would engage the public again and explain his advocacies, and from there see how he fares in the polls.

If by the middle of next year he doesn’t land among the top four presidential candidates, it may be time to put off his presidential plans, he said.

“If I still have the people’s support in the future, I’ll go ahead. But that’s not my focus right now,” he said.

In Gapan City yesterday, Cayetano said that while he kept himself open to other government posts, he still dreamt of becoming the next president. With a report from Armand Galang, Inquirer Central Luzon