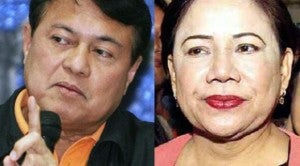 MANILA, Philippines—Senator  Cynthia Villar  did not rule out  the possibility that her husband, former Senator Manny Villar, may return to politics and  run again for president in 2016.

“Alam mo kay Manny ang presidency is destiny for him after 2010. Sabi niya  kung sayo iyan, dadating sayo yan. Kung hindi sayo yan  , hindi dadating sayo yan (You  know, for Manny, presidency is destiny for him after 2010. He said if it’s meant for you, then it will come. If not,   then it won’t come),”   the senator said in an interview on Wednesday when asked if her husband could be the Nacionalista Party’s bet in 2016.

But Senator Villar said  the NP  has  not yet formally discussed  its plans in 2016, saying  it was too premature to  decide  on it at the moment.

Even her husband though, he said, welcomed other   NP members  who also want to make themselves available for the highest position in the land.

Senate Majority Leader Alan Peter Cayetano was one of the NP members who has openly declared his  intention to run for  president  while Senator  Antonio “Sonny” Trillanes, another partymate, was said to be his running mate.

Another NP member, Senator  Ferdinand “Bong-Bong” Marcos Jr., was also mentioned as among the possible contenders  in  the 2016 presidential race.

“They are all deserving, they can do  it because they are all popular. It’s a matter only of finding out if you’re popular to become  president or vice president.  There’s nothing wrong about it,” Senator Villar said of the  three senators.

“Like Bong-Bong, he  is a re-electionist senator. If in the future he decides that he will not run as president or vice president, he can always run for  reelection as a senator. He has nothing to lose because he  will be campaigning as a reelectionist. “

She said the three senators could all aspire to become president but in the end , the “chance of winning” should remain the  biggest motivation  for one to decide whether to run or not.

The senator said her husband was informed about  the  positioning of the three senators and was okay with it.

In fact, she said, Manny Villar has an advice for the three senators: “ Aba maging popular kayo para manalo kayo (You have to be popular to win).”