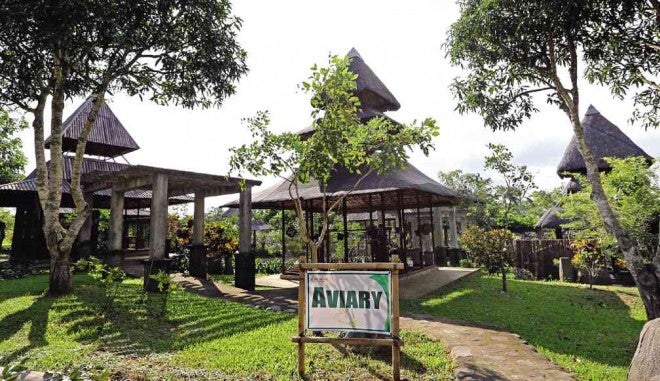 The controversial farm estate, which Vice President Jejomar Binay has denied as his, maintains an aviary with a selection of rare and exotic wildlife registered under the name of his daughter.

Makati Rep. Abigail Binay, the Vice President’s daughter, owns at least 56 heads of rare birds as of 2006, based on records from the Department of Environment and Natural Resources (DENR) in Batangas province.

The younger Binay was issued   a certificate of wildlife registration—the permit issued on Feb. 14, 2004, by the DENR Calabarzon (Cavite, Laguna, Batangas, Rizal, Quezon) to keep the birds in an aviary at the farm located in Barangay (village) Maligaya in Rosario, Batangas.

But Representative Binay’s records with the DENR lasted until only 2006, according to Batangas Environment Officer Jose Elmer Bascos.

“They (wildlife owners) should submit a quarterly update (of the birds in their possession) or if these were disposed of already,” Bascos said in a phone interview on Sunday.

The Inquirer, however, did not see the registered bird species when reporters visited the farm estate on Oct. 23.

The ocular inspection spearheaded by Sen. Antonio Trillanes IV, with print, broadcast and radio reporters in tow, was prompted by an invitation from businessman Antonio Tiu for a tour of the farm that he made during a Senate hearing to prove his ownership of the property.

He said he bought the farm as a “package,” along with the aviary, its amenities, structures and antique fixtures when he acquired the 150-hectare property from Laureano Gregorio.

Tiu said he had paid P11 million of the P450-million total property cost.

Instead, what the Inquirer saw at the Batangas aviary was one Rufous hornbill (Buceros hydrocorax), an endemic species. Inquirer photographer Raffy Lerma was also able to take pictures of two other rare birds—one predominantly blue and the other predominantly yellow in color.

The Wild Bird Club of the Philippines counsel, Ipat Luna, when shown Lerma’s photos of the birds on Sunday, said these “are exotic and are not Philippine birds.”

“Only the Luzon bleeding-heart and the emerald dove are Philippine species,” Luna said when asked to comment on the bird species listed under Repesentative Binay’s name.

“These are for show. [The] selection seems, to me, like they’re the colorful and regal-looking ones,” she added.

Luna was alarmed at seeing a hornbill, listed as a “vulnerable” species by the International Union for Conservation Nature, in captivity when media footage of the farm first came out in October.

She called the attention of the DENR Biodiversity Management Bureau on Oct. 7 to investigate the hornbill, locally called “kalaw.”

Last week, the DENR sent a representative to the farm but Bascos said their office was refused entry by the farm’s caretaker.

“The caretaker said he did not have a permission from his boss to let our men in,” Bascos said. “They did not say who their boss is,” he added.

Bascos said the DENR had no record of a hornbill being kept in captivity in the farm.

“It’s possible that a permit was issued to the person from whom the bird was bought, but still its final destination should have been registered with us,” Bascos said.

In reply to the Inquirer’s request for comment, Sunchamp lawyer Czarina Quintanilla of the Gabionza de Santos firm, said Sunchamp was open to any inspection of its agri-tourism park by different government agencies “done in accordance with the law and due process.”

“The company categorically states that there are no endangered or restricted birds in the aviary,” Quintanilla said in a text message on Sunday.

Without elaborating, she said:

“It would appear that the threats made on the company are now materializing, but the company still hopes that the government will not be used for and, in fact, protect private business from partisan politics.”

The Vice President’s camp, however, said Binay used to lease only 9 ha of the property for its hog-raising business under JCB Farms and never owned the land and the rest of the amenities on it.

Binay divested his shares from the piggery business in 2010, his spokespersons said.