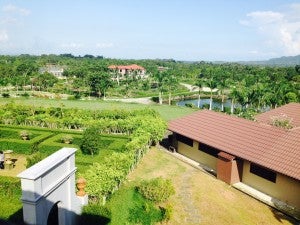 The estate was also dubbed as “Hacienda Binay” by a whistleblower.

No less than businessman, Antonio Tiu, who was tagged as the dummy of Binay, toured Trillanes and members of the media to a 145-hectare property that he said he owns.

This was contrary to former Makati Vice Mayor Ernesto Mercado’s allegation that the property was 350 hectares.

Mercado also claimed that the property belonged to the Vice President.

Tiu first brought Trillanes and the media to the so-called mansion, and then to the pavilion, kew garden, piggery and the orchid garden, which is being leased by Binay’s wife, former Makati Mayor Elenita Binay.

Trillanes admitted that at first glance, there was no trace that the property belonged to the Binays.

“Karangyaan lang,” he said, when asked if there was anything in that property that could identify with the Binays.

Told about Trillanes’ observation, Tiu said the media have yet to see his other properties.

Asked then if he did not agree with the senator’s observation that his property was lavish, Tiu said: “Para sa standard ko hindi e.”

Tiu insisted that the property is owned by his company, Sunchamp Real Estate Development Corp, and that the Binays had never stayed in their mansion since they took over of the ownership of the property last August.

But Mrs. Binay, he said, must have probably frequented to her orchid garden that was why people assumed that the whole property belonged to the Binays.

Tiu clarified that Mrs. Binay was only renting a 9-hectare orchid garden at P90, 000 a year.

The businessman insisted that he owned the 145-hectare property, and not the Vice President.

Veep sees Roxas hand in campaign against him