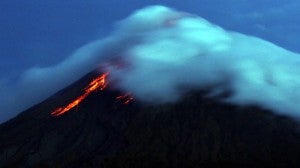 MANILA, Philippines—A lava flow on Mayon Volcano, which happened on Sunday, was seen to etch its side 300 meters to 400 meters downhill, the volcanology institute said Tuesday.

In perspective, a 300-meter to 400-meter track is approximately as long as four football pitches or 14 basketball courts.

In its Mayon bulletin, the Philippine Institute of Volcanology and Seismology (Phivolcs) said the lava flow happened on Sunday but was investigated through an aerial survey on Monday.

Sulfur dioxide flux was recorded at 272 metric tons per day on Monday.

Read Next
Magnitude 4.2 quake jolts Kidapawan
EDITORS' PICK
UK’s Boris Johnson will resign, BBC reports
Unemployment rate up to 6% in May
Geek out at TOYCON 2022 powered by Smart Signature
High inflation: Your P1 is now worth only 87 centavos
High-risk pregnancy: Reducing your risk is in your hands
House energy committee chair Arroyo bats for cheap electricity
MOST READ
Suspect in grisly killing of missing woman in Bulacan arrested
Kim Atienza’s daughter flaunts bikini body in response to critics of her ‘revealing photos’
Japanese artist who created ‘Yu-Gi-Oh!’ found dead in the sea
UK PM quits as Conservative leader
Don't miss out on the latest news and information.