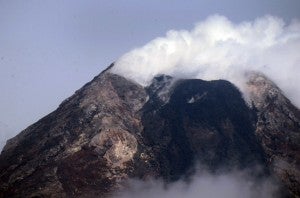 In this handout photo taken on October 12, 2014 and released by Philippine Institute of Volcanology and Seismology (PHIVOLCS) shows the crater of Mayon volcano spewing smoke as seen from the observation post in Legazpi City, Albay province, southeast of Manila. AFP

Eduardo Laguerta, resident volcanologist of the Philippine Institute of Volcanology and Seismology (Phivolcs), said the lava flow was estimated to be 100 meters long cascading at the southeast side of the volcano.

“If the flow will continue, it would go through Bogña and Buyuan (gullies), both part of the southeast quadrant of the volcano,” Laguerta said.

Aside from the lava flow, a crater glow was also recorded early on Sunday, he added.

According to Laguerta, they would consider raising the alert level to 4 if the lava flow and crater glow would continue.

Last Sunday, Oct. 12, a 350-meter long viscous lava flow was seen, the first since Sept. 15, when Mayon became restive and alert level 3 was raised over the volcano.

The bulletin posted by Phivolcs on its website at 8 a.m. Sunday said Mayon Volcano’s seismic network recorded two volcanic earthquakes during the past 24-hour observation period.

No crater glow was observed on Saturday night due to inclement weather, while the sulfur dioxide (SO2) emission was measured at an average of 269 tons per day on Oct. 17, the bulletin said. With a report from Aries Hegina, INQUIRER.net

Read Next
Gov prays, hopes nothing bad happened to missing wife
EDITORS' PICK
Geek out at TOYCON 2022 powered by Smart Signature
UK’s Boris Johnson will resign, BBC reports
High inflation: Your P1 is now worth only 87 centavos
High-risk pregnancy: Reducing your risk is in your hands
Unemployment rate up to 6% in May
House energy committee chair Arroyo bats for cheap electricity
MOST READ
Suspect in grisly killing of missing woman in Bulacan arrested
Kim Atienza’s daughter flaunts bikini body in response to critics of her ‘revealing photos’
Cop slain in Isabela ambush
FDA probes popular Filipino noodle brand for ‘high level of ethylene oxide’
Don't miss out on the latest news and information.