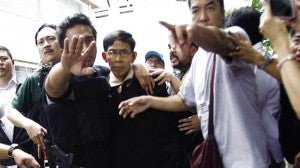 MANILA, Philippines–A Human rights group on Thursday trooped to the Department of Justice in Manila to demand for the speedy conviction of retired Major General Jovito Palparan.

“We want no less than the speedy conviction and detention of Palparan. Palparan is as free as he was in the service, at home in a military headquarters,” Karapatan secretary general Cristina Palabay said.

Palabay urged Justice Secretary Leila de Lima and the Aquino government to ensure that Palparan would be detained in a regular jail.

“We want a categorical statement from DOJ Secretary de Lima and Malacañang that they will stand by the relatives of missing students Sherlyn Cadapan and Karen Empeno and all the victims of Palparan,” she said.

The two University of the Philippines students went missing in 2006 in Bulacan. Palparan was tagged as the mastermind behind their abduction.

Erlinda Cadapan, mother of one of the missing student, appealed to de Lima for a “genuine support.”

Cadapan said de Lima is aware of the case citing her previous positions as a human rights chair.

According to her, justice seemed to be evasive after the court’s decision to transfer Palparan under military custody.

“We will ensure that Palparan’s conviction will not go down the drain, unlike other human rights cases that the DOJ has handled,”  Palabay said.

Palabay assailed the “superbody” created by the Aquino administration in 2012 to investigate human rights cases.

“In its two years, the superbody not only served as deodorizer but also as freezer for human rights cases the government is supposedly investigating,” she said.