KATHMANDU — A snowstorm in the Himalayan region of central Nepal has killed three foreign trekkers and a local, while more than 100 others remain out of contact, officials said on Wednesday.

“There has been heavy snowfall in the area, up to three feet (91 centimeters),” local police official Ganesh Rai told AFP. 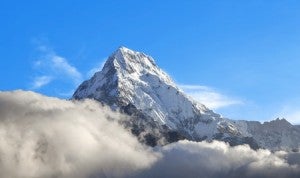 “Among the dead are two Polish trekkers and one Israeli. A Nepali was also buried by the snow,” he said.

Officials rescued 13 trekkers stranded in the storm after the weather cleared on Wednesday, but more than 100 other foreign tourists remain out of contact in Mustang district, Rai said.

He said a total of 168 tourists had registered to trek in Mustang along the highly-popular Annapurna circuit this week, of whom 152 were out of contact.

Mustang district official Baburam Bhandari said “the phone network is not very good so we have not been able to get in touch with the missing, but we hope to find them later today.”

Thousands of trekkers visit the

every October, when weather conditions are deemed favorable for hiking trips. However, Mustang has seen unusually heavy snowfall this week as a result of Cyclone Hudhud, which struck neighboring India’s eastern coast at the weekend.