Catholic bishops: PH gov’t must pursue case vs US soldier for transgender slay 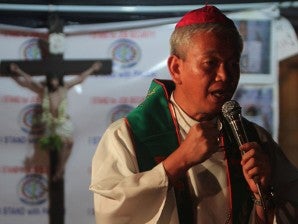 MANILA, Philippines — Catholic bishops urged the government to pursue the case against a US Marine accused of killing a Filipino transgender in Olongapo City.

“The case must be pursued. The Visiting Forces Agreement (VFA) and Enhanced Defense Cooperation Agreement (EDCA) are not licenses for Americans to commit crimes in the Philippines,” said Sorsogon Bishop Arturo Bastes.

“We should have learned from the lesson of Daniel Smith. Na-1-2-3 na ang mga Pilipino noon (The Filipinos were duped in that case),” added Manila Auxiliary Bishop Broderick Pabillo.

Daniel Smith was an American soldier who was accused of and tried for the rape of Filipino woman Nicole in 2005. When he was sentenced to 40 years for rape, the Philippine government turned over his custody from the Makati City jail to the US embassy amid public outcry. He and his lawyers managed to get an acquittal at the Court of Appeals after Nicole recanted her accusation. It was said that the American and the victim settled out of court.

“This [new case] will test the Philippine’s determination to defend its citizens and uphold its laws against the Americans. We shall see how far those agreements are for us Filipinos,” Pabillo added.