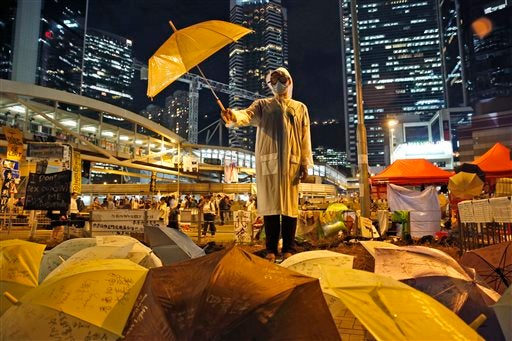 In this Thursday, Oct. 9, 2014 photo, a protester holds an umbrella during a performance on a main road in the occupied areas outside government headquarters in Hong Kong’s Admiralty in Hong Kong. AP

BEIJING – Chinese police have detained two Beijing activists who took part in a Hong Kong pro-democracy march, a friend said Monday, the latest confirmation of dozens of arrests over the protests.

China has in recent weeks held around 40 people on the mainland who had expressed support for the universal suffrage protests in Hong Kong, according to rights groups.

The vague charge of “picking quarrels” has been increasingly used by Chinese police to hold human rights lawyers and activists in recent months.

In July, Zhang and Li spoke in Hong Kong to foreign media affiliated with the Falun Gong spiritual movement, which is banned on the mainland, as they took part in a pro-democracy march that drew tens of thousands of people.

Zhou added that their detentions were related, saying: “Before the arrest Li Lirong was questioned by the police, and they specifically mentioned the Hong Kong interview she had given.”

Demonstrations in Hong Kong demanding open elections have brought tens of thousands to the streets in recent weeks, and Beijing has declared them “illegal”.

Hong Kong police Monday removed some of the barricades at sites where pro-democracy demonstrators have been holding more than two weeks of rallies, allowing some traffic to move through previously blocked parts of the city.

More than 40 mainland Chinese have been detained in the last two weeks for supporting Hong Kong’s pro-democracy movement, according to reports compiled by the US-based advocacy group Chinese Human Rights Defenders.

Rights group Amnesty International estimates that a further 60 activists have been questioned by police.

Among those held were a group of 10 artists in Beijing who had arranged a small gathering in support of the protests, according to lawyer Li Fangping.

They include poet Wang Zang who was detained after he posted a picture of himself online holding an umbrella, a symbol of the Hong Kong protests, his wife Wang Li told AFP.

Police had not stated any reason for the arrest, she said, adding that after she spoke to foreign media she and her young child were detained for around a day.

Scholar and longtime human rights advocate Guo Yushan has also been held on a charge of “picking quarrels”, his lawyer Li Jin said.

Zhang Miao, a Chinese assistant for German weekly Die Zeit, was detained on the same charge soon after returning to the mainland from Hong Kong, where she had been assisting with a report on the protests, her brother told AFP.

German deputy government spokeswoman Christiane Wirtz told reporters that Zhang’s arrest “is worrying news for the German government of course and the government expects the accusations to be cleared up quickly”.

But China’s foreign ministry spokesman Hong Lei implied on Monday that Zhang had acted illegally, saying she was “accused of provoking trouble and disturbing social order. She does not have the necessary credentials”.

Former colonial power Britain handed Hong Kong back to China in 1997 under a “one country, two systems” deal that guarantees liberties not seen on the mainland, including freedom of speech and the right to protest.

Under President Xi Jinping China has cracked down on dissent, detaining or imprisoning dozens of academics, journalists, rights lawyers and activists. Restrictions on the media have also been tightened.

In an apparent sign of increased censorship, a notice circulating online purporting to be from China’s top media regulator said that publishing books by several moderate government critics, including economist Mao Yushi, would be banned.

“Many believe the news has some basis in truth,” the Global Times newspaper, which has ties to the ruling Communist party, said in an editorial on Monday.

“If one has positioned himself at odds to the country’s mainstream political path, he shouldn’t expect his influence to keep on rising without disruption,” it added.