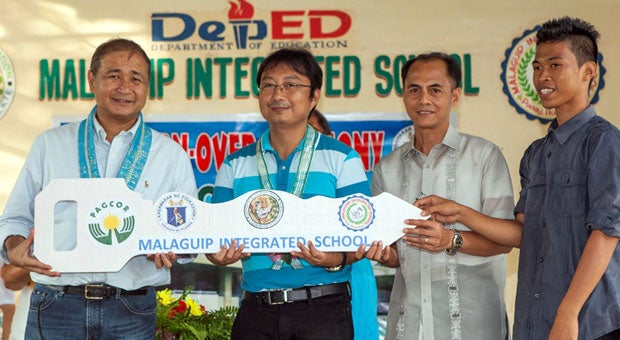 MANILA, Philippines – Eighteen-year old student Meynard Villanueva finished grade school in 2008 with highest honors. But because his parents had no stable source of income, he was not able to enroll in high school.

A consistent honor student from the far-flung sitio of Callaguip, Villanueva would have to spend P140 every day to go to the nearest high school in Paoay town – something that is too much for his parents to shoulder.

That’s why he considers the opening of the Malaguip Integrated School (MIS) high school department in Paoay as a big blessing since the school is just a five-minute walk from their house.

Thanks to the Philippine Amusement and Gaming Corporation’s (Pagcor), which recently donated a one-story, five-classroom building to the high school students of the MIS.

“Since we launched this project in 2011, our agency has already released P5 billion to build thousands of classrooms in public schools nationwide. These modern and more spacious classrooms are our legacy to the Filipino youth,”   Naguiat said in a statement on Monday.

With Pagcor’s donation of additional classrooms, high school students like Villanueva can now study in well-ventilated and comfortable learning venues.

Mylene Passion, one of the pioneer high school teachers of MIS said they had been borrowing the classrooms of elementary students since 2011.

“Because of Pagcor’s donation, we no longer have to borrow the rooms of our elementary department. All high school students of MIS are now occupying the new Pagcor building,” she said.

Pagcor also donated a two-storey, ten-classroom building to the high school students of the Ilocos Norte College of Arts and Trade (INCAT) in Laoag City, one of the oldest and biggest public high schools in Ilocos Norte which is also known for its technical vocational courses.

INCAT’s Vocational Schools Superintendent Eugenio Pedro said Pagcor’s donation was a big help to their school. Since INCAT has been around for a century, many of its old buildings are already deteriorating.

“We are glad that Pagcor came in to help. Before, many students are having classes in outdoor areas. Now, our teachers can implement better teaching strategies. What they donated to us will greatly contribute to the attainment of our goals,” Pedro said. Maila Ager, INQUIRER.net