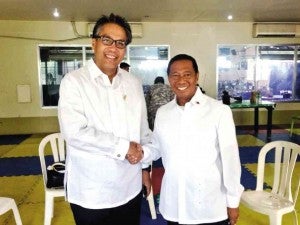 In a statement, UNA interim secretary general Atty. JV Bautista said that the plot is a“well-funded, well-financed, and well-organized conspiracy”.

“This is a well-funded, well-financed, well-organized conspiracy, the principal aim of which is to destroy the chances of Vice President Binay to become the next President in 2016,” Bautista said in a morning television program.

“Nognog (dark-skinned) is the derisive name used by LP operatives to refer to Binay,” Bautista claimed.

He said that they have uncovered the plot through insiders in the Liberal Party (LP) and the media.

Bautista said that the helicopter used to take aerial photos and videos of the Sunchamp Agri-Industrial Park in Rosario, Batangas is allegedly owned by financiers of Roxas.

The Eurocopter EC-130B-4 used to take aerial shots of the said agro-industrial park is owned by Salvador“Buddy” Zamora II and Eric Gutierrez who are business partners and allegedly principal financiers of Roxas.

“[Edgar] Erice is in mining, his partner is Eric Gutierrez. Mr. Gutierrez and Mr. Buddy Zamora are the owners of this chopper. They paid for this flight. Buddy Zamora is a financier of Mar Roxas,” Bautista said on a morning television program.

Bautista: Mercado was not on flight

Bautista added that this discovery disproves the claim of former Makati City vice mayor Ernesto Mercado during the Senate Blue Ribbon subcommittee hearing on the Makati City Hall Building 2 last week when he said that he was the one taking pictures of the alleged property of Vice President Jejomar Binay.

He was not (on the flight). He was lying when he said he was there,” Bautista said.

The lawyer bared that Mercado was not in the flight, citing a flight plan he obtained from the Civil Aviation Authority of the Philippines (CAAP).

He said that the passengers of the flight include: Dexter Estacio, Marl Jogardi and Ariel Olivar. Estacio is allegedly a graphic artist working for the Office of Senator Alan Peter Cayetano.

Roxas cool to 2016 alliance with Binay