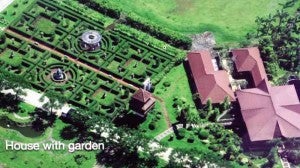 An aerial view of the 350-hectare agriculture estate in Rosario, Batangas province, that has a garden patterned after London’s Kew Gardens. CONTRIBUTED PHOTO BY ERNESTO MERCADO

MANILA, Philippines—Former Makati Vice Mayor Ernesto Mercado showed during a Senate hearing on Wednesday aerial shots of what he described as “Hacienda Binays” in Rosario, Batangas.

Mercado said the “Hacienda Binays” is on a 350-hectare land which is six times bigger than the historic Luneta Park in Manila, 10 times larger than the Araneta Center in Quezon City or half as big as the entire city of San Juan which is at 700 hectares.

The former vice mayor played the video presentation during the ongoing hearing of the Senate blue ribbon subcommittee on the controversial Makati City Hall 2 parking building.

He said he was exposing the alleged properties of Vice President Jejomar Binay and his family to find out if he was declaring all his assets in his statement of assets, liabilities and net worth.