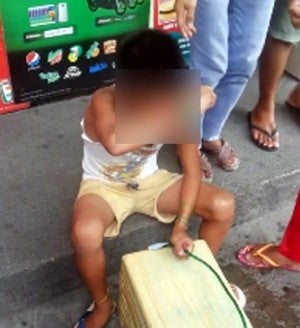 MANILA, Philippines – Malacañang on Sunday said the Department of Social Welfare and Development has already reached out to the 11-year old boy who was robbed of his earnings while selling bread in Caloocan.

(The child and his family are being assisted by the Department of Social Welfare and Development.)

Coloma said the child would undergo psychosocial debriefing because of the trauma he went through after he was held up by a still unidentified man.

The boy’s ordeal after the robbery was caught on video by a bystander and the footage has since become viral online. Many people offered to help the boy, including the Caloocan city government officials.

Coloma said the boy’s family would also be given a slot in the Pantawid Pamilyang Pilipino Program (4Ps) or the conditional cash transfer program of the national government.

(They will be given participation in the 4Ps for assistance in their everyday needs.)

He said that while education in public schools is free, the additional assistance would ensure that the boy would be able to stay in school and be given adequate health care.

In the viral video, the boy could be seen shaking in fear and crying as good Samaritans tried to calm him down.

Caloocan public information chief Nolan Sison earlier told the Philippine Daily Inquirer that he and Mayor Oscar Malapitan were able to visit the boy at his house.

He said the child was still traumatized but eventually narrated how a man, who posed as a buyer, grabbed him and pointed a knife at him. The man took the child’s earnings worth P200.

The boy said he works to help his mother, a single-parent and laundrywoman, and his elder brother, a construction worker.