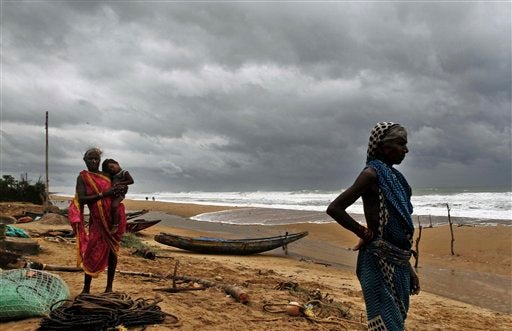 Fisherwomen watch the sea waves before evacuating the place near Podampeta village, on the outskirts of Gopalpur beach in Ganjam district, 140 kilometers (87 miles) south of Bhubaneswar, India, Saturday, Oct. 11, 2014. AP

HYDERABAD, India — Heavy rains and gusts ripped through a large swath of India’s eastern seaboard, uprooting trees and snapping power cables as a powerful cyclone swept through the Bay of Bengal and slammed into the southern city of Visakhapatnam, one of two storms pounding Asia on Sunday.

In Japan, at least 35 people have been reported injured as Typhoon Vongfong, packing winds of up to 180 kilometers (110 miles) per hour, unleashed rains and gusts on Okinawa and was aiming at the next island of Kyushu, where authorities told 150,000 people to evacuate.

Cyclone Hudhud, described as “very severe” by India’s meteorological department, packed winds of 195 kilometers (120 miles) per hour when the edge of the storm hit land, Chief Staff Officer of India’s Eastern Naval Command Rear Admiral S.K. Grewal told reporters. The cyclone’s wind speed dipped to about 160 kph (99 mph) , but would pick up again as the tail end of the storm follows later Sunday, he said.

At least two people were reported dead — one from a wall collapse and the other when a tree toppled over.

Visakhapatnam, which was bearing the brunt of the cyclone’s fury, is one of the largest cities in southern India and a major naval base.

At least 400,000 people have been evacuated from the coastal areas of Andhra Pradesh and Orissa states. Hundreds of shelters have been set up to house the evacuees.

Experts said that the storm was likely to cause widespread devastation along nearly 300 kilometers (185 miles) of India’s coast. Television footage from Visakhapatnam showed downed electrical poles, uprooted trees and massive debris strewn in the streets.

Grewal said that 30 diving and 20 rescue teams were on standby.

Hundreds of rescuers of India’s National Disaster Response Force were also spread out across the two states.

Electricity lines have been disconnected in separate parts of Andhra Pradesh to avoid electrocutions, Arvind Kumar, a relief and rescue official told reporters.

Four districts in Andhra Pradesh state that are home to more than 14 million people — Srikakulam, Vijayanagaram, Visakhapatnam and East Godavari — are likely to be worst hit, including about 350 coastal villages.

The Indian Ocean is a cyclone hot spot. Of the 35 deadliest storms in recorded history, 27 have come through the Bay of Bengal — and have landed in either India or Bangladesh. In 1999, a cyclone devastated Orissa’s coastline and killed at least 10,000 people.

While India has a disastrous record of response to natural calamities, it managed last October to safely evacuate nearly a million people out of the path of Cyclone Phailin, the strongest tropical storm to hit India in more than a decade. Phailin destroyed hundreds of millions of dollars’ worth of crops after it made landfall in Orissa, but claimed only about 25 lives.

The U.S. military on Okinawa, where last week’s typhoon killed three U.S. airmen who were washed out at sea, instructed personnel and their families to remain indoors Sunday until strong winds and rain subsided.