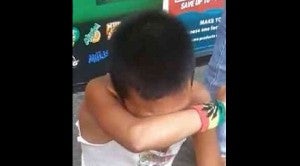 MANILA, Philippines–The 11-year-old boy, who was robbed of his earnings from selling bread in Caloocan, and who was seen shaking and crying afterwards in an online video which went viral, picked up plastic bottles and scrap metal, and sold them in junk shops before he became a pandesal vendor.

According to Nolan Sison, the city’s public information chief, the boy who is a Grade 5 student, began as a scavenger at the age of 8.

Sison and Caloocan Mayor Oscar Malapitan spoke to the boy when they visited his house on Saturday night.

According to Sison, the boy, who was “traumatized” after the robbery on Thursday morning, at first refused to speak to them, but “opened up” after Malapitan gave him a chocolate bar.

He said the boy told them that he opted to sell bread since it was “easier” than collecting scraps and selling these to junk shops.

The boy, according to Sison, has been selling bread which he gets from a bakery near his house—for two years.

According to Sison, the boy starts selling pandesal as early as 5:30 a.m. At the end of the day, the boy would return the unsold bread to the bakery, and pay for what was sold.

Sison said the boy earns about P50 a day, a portion of which is for his school allowance and the rest for the family’s food.

Asked why he was working so hard, the boy replied he wanted to buy a bicycle.

The boy’s mother, a single parent, is a laundrywoman. His elder brother, a 16-year-old out-of-school youth, works as a construction helper. A younger brother is just 2 years old.

Based on the boy’s narration, he was selling pandesal in the Deparo area on Thursday, between 6 and 6:30 a.m., when a man wearing a cap called him and said: “Come here, someone said he would buy your pandesal.”

“So (the boy) went. Suddenly someone hugged him from behind, covered his mouth, and pointed a knife to his side,” Sison said.

The man fled quickly after taking the boy’s earnings of about P200 and his “pandesal box.”

“The boy was left behind on the sidewalk crying because he lost everything and because he needed to get home. If not, his mother would scold him,” Sison said, adding it was this instance that was captured by a bystander on video.

According to Sison, the boy’s mother will receive a “certificate of livelihood starter package” worth P20,000 on Monday, during the city’s flag-raising ceremony at the city hall.

“So she can use it to start a business,” he said.