Mine firm’s good deed is felt in Bohol school 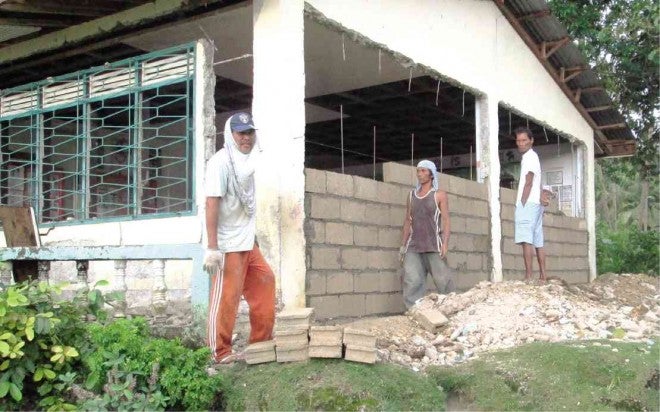 ROSARIO, Agusan del Sur—By helping each other repair school buildings damaged by the Bohol quake and with financial help from a mining firm based here, parents, teachers and village officials of North Loon Central Elementary School in Loon town, Bohol province, showed a kind of cooperation that came as a pleasant surprise.

In the Visayas and other parts of the country, Boholanos would be taunted with “ija ija, ajo ajo,” which literally means “what is yours is yours and mine is mine.”

Lawyer Raul Villanueva, president and chief executive officer of Philsaga Mining Corp. based here, who recently attended the inauguration of school buildings in Bohol with other company executives, said the entire Loon community helped in the reconstruction by providing manual labor.

Philsaga gave P1 million for the reconstruction effort and, with the help of the Loon community, at least P108,000 had been saved on labor cost. The savings were used to buy computers for the school.

Villanueva said the P1-million fund was part of the company’s corporate social responsibility program, which was designed to extend help to communities and impart lessons on self-reliance.

“The amount may be minimal, but the point here is that we want parents and other stakeholders to be happy and proud,” he said.

“With a sense of ownership, we encouraged them to put their efforts together to rebuild the school,” he added.

Villanueva said Philsaga had chosen as beneficiary the public school located in the northern part of Loon because it was the hardest-hit area during the quake on Oct. 15 last year.

At least 67 residents were killed during the quake. The centuries-old Church of Our Lady of Light, one of the oldest in the country, was left in shambles.

Maria Zelda Longat, school principal, said the repair of the two school buildings was a big help in school officials’ efforts to bring back normalization to the school. Many schoolchildren, she said, are still suffering from trauma.

She said Philsaga was the first to extend funding support for the reconstruction effort.

Aside from Loon, Villanueva said the firm also gave P1 million to repair school buildings in Palo town, Leyte province, one of the areas hardest hit by Supertyphoon “Yolanda.”

Liberato Cobacha, principal of San Joaquin Central Elementary School in Palo, said that except for a few walls left standing, almost all school buildings in the town were leveled by the storm surge. Chris Panganiban, Inquirer Mindanao