MANILA, Philippines—Senator Ramon Revilla Jr. could face money laundering charges as the Anti-Money Laundering Council (AMLC) told the Sandiganbayan on Thursday that Revilla deposited at least P87.6 million in his bank accounts during the supposed period he was accused of participating in the pork barrel scam.

During Revilla’s bail hearing from plunder on Thursday, AMLC’s lawyer Leigh Vhon Santos said according to their report, Revilla deposited P87.6 million in his and immediate family members’ bank accounts from April 6, 2006 to April 28, 2010. 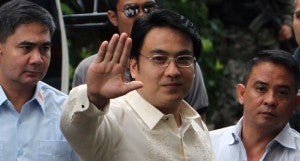 This was the same period that principal whistleblower Benhur Luy alleged that Revilla through his aide and lawyer Richard Cambe received kickbacks from his projects funded by his Priority Development Assistance Funds (PDAF).

Revilla and his wife also transferred to the company at least P16 million, Santos said.

The AMLC also noted that Mercado-Revilla’s company received the money despite being non-operational and having insufficient capital, Santos said.

Revilla also closed his investments and bank accounts immediately before and after the alleged pork barrel scam erupted in the media, Santos added.

“Considering all the foregoing, these are indicative of money laundering scheme using the aforementioned bank accounts. There is, however, a need to conduct further investigation and determine the extent of the subjects’ participation and identify the other monetary instruments that were possibly involved in the laundering scheme,” the AMLC said in their report.

Santos also told the court that Revilla did not declare these cash amounts in his Statements of Assets and Liabilities Networth (SALN) from 2004 to 2010, which is also indicative of unexplained wealth.

Revilla is detained at the Philippine National Police Custodial Center as he faces plunder for his alleged involvement in the pork barrel scam, the purported scheme of using public funds to ghost projects for kickbacks.
RELATED STORIES