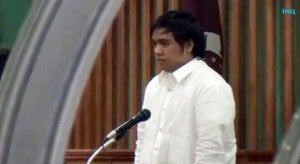 During Revilla’s bail hearing on his plunder case at the Sandiganbayan Wednesday, Luy’s forehead furrowed as Revilla’s lawyer Joel Bodegon enumerated the whistleblower’s bank accounts that now only contained maintaining balances after the contents were allegedly withdrawn by Luy at the height of the investigation.

These are Luy’s accounts under the freeze order by the Manila Regional Trial Court Branch 22 following the forfeiture case filed by the Anti-Money Laundering Council (AMLC).

Bodegon said Luy also has in his possession a Mitsubishi Montero, a Toyota Corolla Altis among other flashy vehicles, when he was under the employ of Janet Lim-Napoles, the alleged mastermind of the pork barrel scam.

Revilla’s lawyer said he mentioned Luy’s assets to “impeach the latter as the witness” of the prosecution in the bail hearing.

Bodegon questioned Luy’s supposed condominium unit in Libis, Quezon City, but Luy said that the unit is still listed as Napoles’ property. Napoles just allowed him to reside there.

“Revilla received not a single centavo in the Priority Development Assistance Funds (PDAF) transactions… The whistleblowers admitted forging the signatures of Revilla… This proves that the witnesses hold the money,” Bodegon said.

Michael Ancheta, who represents Revilla’s co-accused Richard Cambe, also said that Luy’s credibility as witness is “on the line” because of these possessions.

“It was his group who prepared the liquidation report. The bank accounts are in their names. They’re the ones who actually ran the show,” Ancheta said in an interview.
Luy did not defend himself about the bank transactions and flashy vehicles, but he was adamant to point out that Napoles and Revilla were those who benefitted the most in the scam.

He said Napoles got 30 to 40 percent of the PDAF, while Revilla got as much as 50 percent.
Luy is Napoles’ entrusted finance officer who turned against his former boss after he was detained on suspicion of starting his own scam.

Napoles, who is detained on a separate illegal detention case, faces plunder and graft charges over the scam Also implicated and detained are Revilla and Senator Jose “Jinggoy” Estrada. A supposedly frail Senator Juan Ponce Enrile, meanwhile, is in the hospital under police custody pending his motion for hospital detention.