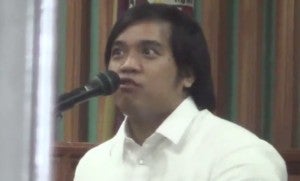 MANILA, Philippines–Benhur Luy and other former employees of JLN Corp. had to use their both hands in forging the signatures of incorporators and beneficiaries of foundations organized by alleged pork barrel racket architect Janet Lim Napoles.

Luy made this revelation when he returned to the witness stand in the Sandiganbayan on Thursday at the hearing of the petition for bail of Napoles and detained Sen. Bong Revilla.

In his testimony, the primary government witness in the P10-billion pork barrel scam, told the antigraft court’s first division that Napoles had instructed him and his coworkers to intentionally make their handwriting unattractive “to make it appear that those were the signatures of farmers.”

The whistle-blower also disclosed that he got at least P3 million in facilitating the multibillion-peso livelihood projects funneled into Napoles’ nongovernment organizations.

“Upon the instruction of Madam, we forged the signatures of the persons on the list of beneficiaries. Because there were so many names, we needed to use our left and right hands,” Luy said, gesturing how he signed the documents with his two hands.

In his cross-examination handled by Stephen David, one of Napoles’ counsels, the witness said he included the names of his classmates and friends as incorporators of six NGOs purportedly on orders of Napoles.

“Madam said we should make our penmanship ugly so it would look like the signatures of farmers. She even wanted us to just print our thumb marks over the names of the beneficiaries,” he said, drawing laughter from the people inside the courtroom.

At times, he said Napoles herself and her children—Jo Christine and James Christopher—would help them sign the list of beneficiaries and other documents pertaining to the disbursement of the projects financed by the Priority Development Assistance Fund, the pork barrel of lawmakers.

Asked by David why he and other employees of the Napoles-owned JLN Corp. falsified the signatures despite them knowing that it was a criminal act, Luy said they were merely complying with the order of Napoles.

“We are just employees of Madam so we just followed what she told us to do. She controls the foundations. The instructions we got came from her,” Luy told David.

The lawyer retorted, “So all of those are just instructions of Ms. Napoles? It took you eight long years to make you realize that she was making a fool out of you?”

But State Prosecutor Joefferson Toribio opposed David’s manner of questioning, saying the defense counsel was already making conclusions and not posing questions to the witness.

For truth to come out

Sensing that David was trying to destroy his credibility by questioning his bank accounts and other properties, an animated Luy insisted that he decided to testify against his cousin “for the truth to come out.”

“We’re not trying to be superheroes. We are just telling the truth,” he said, holding back his emotions.

In his testimony, Luy narrated that he started working as Napoles’ personal assistant in September 2002 with a monthly salary of P8,000.

Two years later, he organized the Social Development Program for Farmers Foundation Inc. ostensibly on Napoles’ prodding with him as president. Among the incorporators of the NGO was a certain Ferdinand Navarro Tantoco, who Luy said was a fellow marathoner.

According to the witness, Napoles promised him and the other presidents of the foundations half percent of the total project cost as their commission.

But Napoles did not make good on her promise and just gave them small amounts, Luy claimed.

Read Next
Quezon cancels ‘niyog’ festival
EDITORS' PICK
SWS: Over 12M Filipinos still jobless as of May 2021
Dizon: 40 of 119 ‘Build’ projects done by 2022
Smart celebrates all kinds of ‘#SimplyLove’ for Pride Month
Spread of Delta variant ‘prevented’ –expert
Smart brings KCON:TACT especially 4U to subscribers from June 19 to 27
SANTIS Delicatessen: The road to survival is sweet and savory
MOST READ
William Martinez sometimes feels his kids ‘don’t remember’ him anymore
Landmark tale of corruption
ICC case vs Duterte may take 3 months in pretrial body
Dizon: 40 of 119 ‘Build’ projects done by 2022
Don't miss out on the latest news and information.