MANILA, Philippines – Malacañang on Thursday insisted that the Department of Justice was focused on ensuring the safety of former Makati Vice Mayor Ernesto Mercado amid questions on why he was allowed to board a helicopter to take a video footage of the alleged “Hacienda Binay.”

Senator Nancy Binay, daughter of Vice President Jejomar Binay, said they wondered how Mercado was able to afford the helicopter ride and why he was allowed to do it despite being under the Witness Protection Program.

Mercado has been testifying before the Senate blue ribbon subcommittee against the Vice President for allegedly receiving kickbacks from the construction of the Makati City Hall 2 parking building.

He personally rode the helicopter that surveyed a 350-hectare estate allegedly owned by the Binays. Mercado alleged that the estate was funded by kickbacks collected while the Vice President was still the mayor of Makati.

(The participation of the Department of Justice is to follow the rules of the Witness Protection Program and to ensure the safety of those under it.) 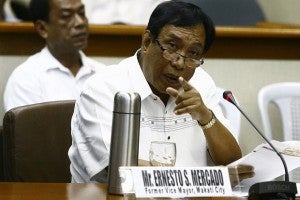 (We heard that Vice Mayor Mercado is strapped for cash right now. That’s why we were surprised that he was able to afford renting a helicopter.)

Presidential Spokesperson Edwin Lacierda earlier denied that government resources were used to fund Mercado’s investigation.
Coloma reiterated that Malacañang had nothing to do with the probe, which has so far tackled the allegedly overpriced parking building and the so-called “Hacienda Binay.”

(We already said that we have no participation in the investigation of the Senate because it is an independent and separate activity of a co-equal branch of government.)

Coloma refused to comment on the estate itself, explaining instead that the Statement of Assets, Liabilities and Networth of a government official should list all his properties and its corresponding value.

(Perhaps it is better for the process of law, when it comes to holding public officials accountable, to prevail.)