MANILA, Philippines—The children of Janet Lim-Napoles have sought relief from the Sandiganbayan to defer their arraignment for graft and dismiss the case against them, claiming it lacked merit.

In a motion for reconsideration filed before the anti-graft court third division, Jo Christine and James Christopher Napoles said there is no evidence that they conspired with their mother in the pork barrel scam.

They added that the charges against them were based on the testimony of whistleblower Marina Sula, who they said is a “polluted source.” 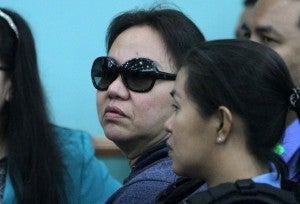 The Napoles children pointed out that Sula has admitted to participating in the alleged scam.

They added the evidence tagged the whistleblowers as being the officials of the dummy foundations in the perpetration of the scheme.

To stress their innocence, the Napoles children said the evidence does not show they had any personal or official transactions with the accused public officials.

The accused then pinned the blame on the whistleblowers who admitted their hand in the scam but obtained immunity from charges for testifying.

The Napoles’ children then asked the court to defer their arraignment set on October 13 pending the court’s decision on their motion for reconsideration.

They also appealed for the dismissal of the graft charges against them for lack of merit.

The court’s special division of five in a resolutions said Jo Christine and James Christopher were found liable for participating in the alleged scam their mother purportedly masterminded.

Both of them had posted bail, while their mother Janet is detained at the Camp Bagong Diwa female ward as she faces plunder case.