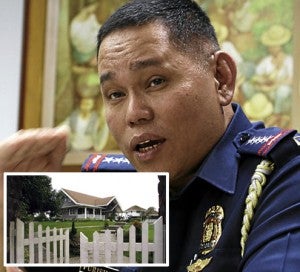 Henares said the PNP, Department of the Interior and Local Government, National Police Commission (Napolcom), Office of the Ombudsman and the BIR had been tasked to conduct a comparison of a policeman’s salary with his assets.

“This is more efficient because we will work on the documentation or evidence,” Henares said. “The Ombudsman and the BIR will help the PNP, Napolcom and DILG in the investigation so we will just have a single probe.”

Henares added: “We’re just finalizing our memorandum of agreement and the memorandum circular that will show how serious the DILG, Napolcom and PNP want to make the process as transparent as possible.”

Henares does not see any conflict in the ongoing debate on Purisima’s property.

“A house is also a mansion, a mansion is also a house. At the end of the day it will be tackled by the lifestyle check. I’d rather not make any conclusion now because some might say I won’t be objective,” Henares said.

Also on Tuesday, the Office of the Ombudsman confirmed it had started a lifestyle check on Purisima, who is facing questions about his assets, including a 4.7-hectare property in Nueva Ecija province.

The task includes checking on Purisima’s family as well, according to Cyril Ramos, Deputy Ombudsman for military and other law enforcement offices.

The lifestyle check will delve into Purisima’s statement of assets, liabilities and net worth (SALN), Ombudsman Conchita Carpio Morales said.

“You have to know the SALN in order to understand if his alleged properties are incorporated in the SALN or (if) they are not there,” Morales told reporters at the Senate, which held a hearing on her agency’s budget.

In Malacañang, a Palace official insisted the President’s office was not turning a blind eye to the accusations against the country’s top policeman.

“We’re not saying that we’re looking the other way or being blind because all issues are being addressed,” Coloma told reporters.

“There are prevailing laws and legal processes and we are ensuring the accountability of General Purisima … If there are specific charges, let the law take its course.”

Coloma pointed to how Purisima had responded to the allegations against him.

“What we are saying is his openness to scrutiny is clear. He is not being evasive to questions pertaining to specific properties that he has declared,” Coloma said.

President Aquino earlier defended Purisima, saying he had not known the PNP chief to “eat too much or live luxuriously.”

Ramos said there was also a need to look into Purisima’s family background. He said the family might have other sources of income.

The Office of the Ombudsman is checking whether there are assets or properties acquired illegally, he said.

Ramos also said the Office of the Ombudsman would take cognizance of reports about Purisima’s Nueva Ecija property, which includes a house, a guesthouse and a swimming pool.

The property is also declared in the SALN, Ramos noted.

“Whether the value is correct or not, it depends on the evidence,” he added.

As for the big discount Purisima supposedly got when he bought a sport utility vehicle in 2013, Ramos said this would be taken up in the fact-finding probe.

Purisima is facing complaints in the Office of the Ombudsman for his alleged hidden wealth and for the construction of his official PNP residence, dubbed the “White House.”

The residence was built with the help of donations from Purisima’s friends.

Purisima has said the “White House” was a donation made to the PNP and not to him personally and that he was just an incidental beneficiary as PNP chief.

He also said his Nueva Ecija property was not a mansion or a villa but an ordinary house.

The rehabilitation czar and former PNP chief, Panfilo Lacson, said Purisima missed a chance to answer questions aimed at him when he opted not to appear during a media visit to his Nueva Ecija property on Monday.

“At least he has confronted one of the major issues being raised against him albeit not personally, but in a ‘talk-to-my-lawyers’ fashion,” Lacson told the Inquirer.

“It could have been better if he had gone to San Leonardo, Nueva Ecija, himself, held a press conference there and addressed the issues altogether in an open, no holds-barred dialogue.”

Lacson earlier called on Purisima to explain if the allegations were false, and resign if the charges were true.

Lacson said the controversy had begun to affect the morale of law enforcers to the disadvantage of peace and order operations.

“He could have put a closure to the controversies hounding him. Nevertheless, it is good that at least he opened his estate, if you may call it that,” Lacson said in a text message.

“Whether or not he was able to convince the public is not for me to (judge),” he added.

Purisima did not join the media visit and left the matter to his lawyer-cousins, Toby and Tito Purisima. Both denied claims that the property was a luxurious estate worth P30 million to P50 million.

Lacson was asked if he believed the sprawling Nueva Ecija property—with a pool, a guesthouse, a gazebo and a guardhouse—could have cost only P2.33 million.

“If he can claim to have bought a P4.5-million SUV (Toyota Land Cruiser) for P1.5 million, I’m not surprised at all if he now professes to have bought that Nueva Ecija property for P2 million. Are you?” Lacson said.

The former senator said the property was not something a PNP chief could afford on his monthly salary alone.

“If we rely on our salary as PNP director general alone, I don’t think he or I can afford it,” Lacson said. “In my case, I’ve had other legitimate sources of income to augment my salary even before I became chief of PNP.”

Purisima was in Cebu City on Monday for various activities. He led Mason members in giving sacks of rice to fire victims on Monday afternoon and also had lunch with members of the group in Marco Polo Hotel.

Mason is an organization of PNP officials, businessmen and police and military retirees who reportedly donated the money for the controversial quarters in Camp Crame that is being questioned.

During his Cebu activities, Purisima declined to be interviewed by the media. PNP regional director Prudencio “Tom” Bañas spoke to the media, instead.

Bañas said Purisima’s visit was planned but did not give details for security purposes.

Maria Luz Araña, a fire victim, received at least five sacks for 17 members of her household.

Purisima was scheduled to visit the police headquarters on Tuesday to attend an award ceremony for regional police personnel. Then he will proceed to the provincial capitol in connection with the government’s donation of a lot to the PNP.–With a report from Chito Aragon, Inquirer Visayas