Binays hit back at Drilon 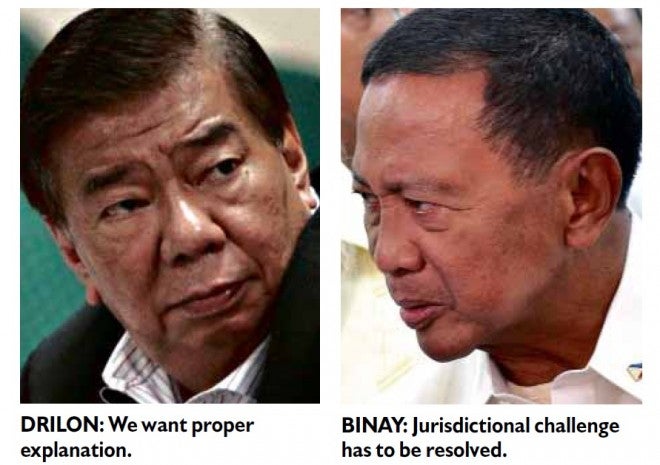 No one is above the law, yes, so follow your own.

This was the reply of the Makati City government on Saturday to Senate President Franklin Drilon’s statement on Friday that the Senate would compel Makati Mayor Jejomar Erwin “Junjun” Binay Jr. and other city officials to testify if they continued to snub summons to an inquiry into the allegedly overpriced Makati City Hall Building II.

“Drilon says that no one is above the law. We agree, and that includes the senators,” Joey Salgado, city spokesperson, said in a statement.

Under the rules of the Senate, “neither Drilon nor the subcommittee can cite anyone in contempt and order their arrest,” he said, referring to the Senate blue ribbon subcommittee headed by Sen. Aquilino Pimentel III that is investigating allegations of corruption in the construction of the P2.28-billion parking building.

“It has to be the whole committee,” Salgado said, referring to the blue ribbon committee chaired by Sen. Teofisto Guingona III.

Talking to reporters in Pasay City on Friday, Drilon said the subcommittee would accept a “proper explanation” from Binay and the other city officials of why they had not been appearing at the inquiry.

“But should they insist and say, ‘We don’t want to appear before the blue ribbon, that’s unacceptable. No one is above the law,” Drilon said.

If they continued to ignore summons, “the committee will be compelled to detain them until they testify,” he said.

Drilon said there was jurisprudence sustaining the Senate’s power to compel witnesses to testify at a hearing.

Binay and other Makati City officials appeared in just one hearing called by the subcommittee. They filed a challenge to the jurisdiction of the subcommittee and never again showed up for hearings.

The subcommittee is studying the challenge, but has not suspended the hearings.

Salgado said that under Senate rules, a “jurisdictional challenge has to be resolved by the whole committee” and “not by one senator or a subcommittee.”

Drilon agreed, saying the Senate would “follow the procedure.”

Speaking to the Inquirer by telephone on Saturday night, Drilon said the blue ribbon committee would decide whether it’s the committee of the whole or the subcommittee that should resolve the jurisdictional challenge.

Binay, through his lawyers, filed a motion on Wednesday requesting the blue ribbon committee to assess and rule as a whole on the jurisdictional challenge filed on Sept. 25.

Binay’s lawyers slammed what they said was the “arbitrary, capricious and whimsical act” of the subcommittee in proceeding with the hearings without resolving the challenge.

“All we want is for Drilon and the subcommittee to follow their own rules,” Salgado said.

In the first place, he said, Binay “has presented a reasonable appeal to the Senate blue ribbon committee to desist from its inquiry… Because after all the Ombudsman now has jurisdiction over the related plunder case.”

Salgado was referring to the plunder case filed in July by Renato L. Bondal and Nicolas “Ching” Enciso VI against Binay, Vice President Jejomar Binay and other Makati City officials.

They said the contract for the Makati City Hall Building II—described in the complaint as “the most expensive parking building in the entire country, if not the entire world”—was supposed to have amounted to only P245.56 million but was overpriced by more than P1.314 billion.

According to Bautista, Drilon, Pimentel, and Senators Alan Peter Cayetano and Antonio Trillanes IV are “skillfully bending Senate rules,” changing these as the proceedings go “to suit their agenda.”

“It is clear to the people that [Drilon] and the senators who are persecuting the Binays keep on saying that [people] should follow the law but they are the ones themselves who are violating their own rules and regulations,” Bautista said.

He said the senators could “no longer” convince the people that what they were doing was “in aid of legislation.”

After all, he said, the main reason the “subcommittee zeroed in” on the elder Binay is that he has announced he will run for President in 2016.

“They said it themselves: The only reason they’re conducting this is because Vice President Jojo Binay said he’s running for President. In other words, if Jojo Binay did not announce that he will run for President they will not engage in this muckraking,” Bautista said, adding that Cayetano, who has expressed an intent to run for President, and Trillanes of having “transformed the Makati inquiry into a platform for political vilification and vendetta.”

He said the “fact that there are only three of them who are now holdouts” was “already a statement that their fellow senators do not care about what they’re doing.”

He singled out what he said were the “billions that Drilon, Cayetano and Trillanes got in exchange for their votes in (former Chief Justice Renato) Corona’s impeachment” under the program.

“They portray themselves as upright, especially Drilon and Cayetano, while the people know that they are also involved in the [pork barrel] scam and other controversies,” he said.

According to Bautista, the subcommittee is a “runaway,” as it “has gone beyond legislative functions to the point that its members are already acting as judges.”

Bautista slammed the conduct of Trillanes, Cayetano and Pimentel, who he said have “prejudged the investigation, including the personalities mentioned by supposed witnesses.”

“They (the three senators) have prejudged the outcome of the Senate inquiry by stating the officials, including (former Makati) Vice Mayor (Ernesto Mercado), were involved in irregularities,” Bautista said.

Mercado has appeared before the subcommittee and testified that Vice President Binay, when he was mayor of Makati, received 13 percent of the cost of infrastructure projects in the city.

Mercado also said the elder Binay used dummies to acquire real-estate property in Makati now worth P1 billion and businesses that were not reflected in his financial disclosures.

As for Drilon, Bautista said the Senate president was “dead wrong” in upholding Pimentel’s decision to proceed with the inquiry despite the jurisdictional challenge pending on the mother committee.

“[What we have] is a runaway subcommittee and we are questioning its jurisdiction and its power to proceed with its hearing. They are railroading this hearing even in the existence of jurisdictional challenge,” he said.

Bautista said Mayor Binay was “not acting above the law,” when he filed the challenge, but was “actually invoking his constitutional rights and redress based on the Senate rules, which the subcommittee continues to violate.”

Drilon: SC can’t stop Senate probe on Binays due to separation of powers