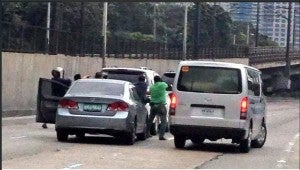 The photo of the alleged incident posted on Twitter.

MANILA, Philippines – The alleged mastermind of the robbery-abduction case along EDSA in September which went viral on social media has surrendered to authorities, a spokesman for the Philippine National Police said.

Mayor said Villanueva, 38, was accompanied by his lawyer Magnum Agpaoa when he went to the CIDG at around 8 p.m. Thursday.

Meanwhile, Director Benjamin Magalong, CIDG chief, said the police official “voluntarily gave himself up for restricted custody” at the CIDG.

He said the CIDG was coordinating with the National Capital Region Police Office for proper disposition.

Villanueva was the alleged mastermind of the September 1 EDSA robbery-abduction incident, during which two employees of a contractor lost more than P2 million to Quezon City policemen. Most of the accused policemen are from the La Loma police station.

At the time of the controversy, Villanueva was the head of the La Loma police station’s intelligence and investigation branch. His classmate at the Philippine National Police Academy, Chief Inspector Joseph de Vera, was the deputy station commander and was first to be arrested.

The robbery and abduction incident in the guise of a police operation was photographed by a motorist along Edsa in Barangay (village) Wack Wack in Mandaluyong City and uploaded on Twitter.

Villanueva went into hiding until his surrender last Thursday.

He was scrutinized for his net worth amounting to more than P6 million despite his P600,000 annual salary.

His brother, Mabini, Batangas town mayor Lino Villanueva is a member of the Liberal Party.