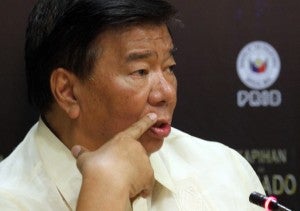 “Of course, VP (Jejomar) Binay and Mayor Binay can bring this issue to the Supreme Court. That’s a privilege of every citizen. But let met reiterate that the questions are in aid of legislation, not for anything else. That is consistent with the decision of the SC,” he said.

Asked if the high tribunal could stop the Senate probe on the issue, Drilon said, “I don’t believe the SC has the power to enjoin legislative acts. The principle of separation of powers dictates that we are supreme in our own sphere.”

“The separation of power would call for the Senate to continue its investigation in aid of legislation,” he said.

While there were similar cases that have been brought to the SC, Drilon said, the court had “always sustained the right of legislature to conduct inquiries in aid of legislation.”

Drilon said he could not remember an incident where the SC had stopped a congressional inquiry except for one case where a resolution did not assert that it was in aid of legislation.

“Since that hearing, all inquiries are done in aid of legislation. That is within the prerogative and the power of legislature,” he pointed out.