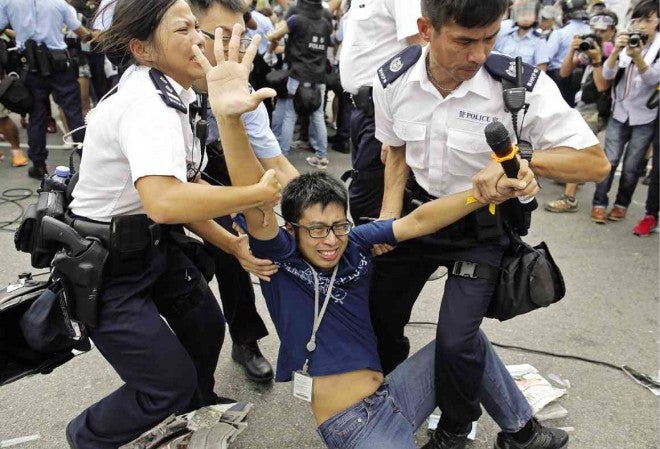 SCUFFLES AT SHOPPING DISTRICT A prodemocracy protester is hauled away by police as scuffles broke out in a shopping district in Hong Kong on Friday. Supporters of Chinese rule stormed tents and ripped down banners belonging to prodemocracy protesters. Protesters earlier welcomed an overnight offer of talks by the territory’s leader to defuse the crisis. AP

HONG KONG — Pro-democracy protesters called off planned talks with the government on political reforms Friday after mobs tried to drive them from the streets where they have held a weeklong, largely peaceful demonstration.

The protesters urged residents to join their cause and demanded that the police protect their encampments. The Hong Kong Federation of Students, one of the groups leading the demonstrations that drew tens of thousands of people earlier this week, said they saw no choice but to cancel the dialogue.

“The government is demanding the streets be cleared. We call upon all Hong Kong people to immediately come to protect our positions and fight to the end,” the group said in a statement.

They demanded the government hold someone responsible for the scuffles Friday, the worst disturbances since police used tear gas and pepper spray on protesters last weekend to try to disperse them.

Hundreds of people remained in the streets early Saturday in Mong Kok, one of Hong Kong’s busiest shopping areas, after the clashes.

“Of course I’m scared, but we have to stay and support everyone,” said Michael Yipu, 28, who works in a bank.

Well after midnight, the crowds stood peacefully, occasionally chanting and shouting, while police looked on.

The standoff is the biggest challenge to Beijing’s authority since it took over the former British colony in 1997. Earlier Friday, the students had agreed to talks with the government proposed by Hong Kong’s leader, Chief Executive Leung Chun-ying. But his attempt to defuse tensions fell flat as many protesters were unhappy with his refusal to yield their demands for his resignation.

The cancellation of the talks — prompted by clashes with men who tried to tear down the makeshift barricades and tents set up by the demonstrators — left the next steps in the crisis uncertain.

It was unclear if those scuffles were spontaneous or had been organized, although some of the attackers wore blue ribbons signaling support for the mainland Chinese government, while the protesters have yellow ribbons. At least some of them were residents fed up with the inconvenience of blocked streets and closed shops, and were perhaps encouraged to take matters into their own hands by police calls for protesters to clear the streets.

“It’s not about whether I support their cause or not. It’s about whether what they are doing is legal or not,” said Donald Chan, 45. “It is illegal. It has brought chaos to the city.”

The police appeared hard-pressed to keep order, and some people emerged bloodied from the fracas. Occasional heavy rain did not noticeably thin the crowds Friday.

But the tide turned after hundreds of people assembled and shouted at police to protect the protesters. Police ended up escorting some of the opponents of the demonstration out of the area.

The chaos prompted calls from police and other top officials for everyone to avoid violence and go home.

“We should not use violence or disrupt social order in any situation,” Leung said. “All people gathering in those areas should disperse as soon as possible and restore social order, so that daily lives will be restored to normal.”

The protesters have been in the streets since Sept. 26, pledging to preserve Hong Kong’s Western-style legal system and civil liberties. They want the Chinese government to reverse a decision requiring all candidates in the first election for Hong Kong’s leader in 2017 to be approved by a mostly pro-Beijing committee. The demonstrators want open nominations.

Leung had appeared at a news conference late Thursday night where he refused to resign and said he had asked Hong Kong’s top civil servant, Chief Secretary Carrie Lam, to engage in talks with protest leaders. Before those talks were called off Friday by the students, Lam said she had begun organizing the discussions.

China’s government has mostly kept quiet during the crisis, other than to call the protests illegal and support the Hong Kong government’s efforts to disperse them. On Friday, however, the Communist Party newspaper People’s Daily accused a small group of demonstrators of trying to “hijack the system” and said the protest effort was doomed to fail.

The front-page editorial said there is “no room for concessions” on the candidate screening issue, noting that Hong Kong “is directly under the jurisdiction of the central government; it is not a country or an independent political entity.”

Some who are sympathetic to the protesters’ demands for wider democracy said the police were not doing enough to protect the demonstrators. But others complained that the protests were disruptive and hurting their livelihoods.

“It affected my company, a perfume business, to deliver goods in the area,” said Ken Lai in the bustling Causeway Bay neighborhood. “I really dislike the fact that they occupied so many areas, all scattered around the city. I’m a Hong Konger too. The occupiers don’t represent all of us.”