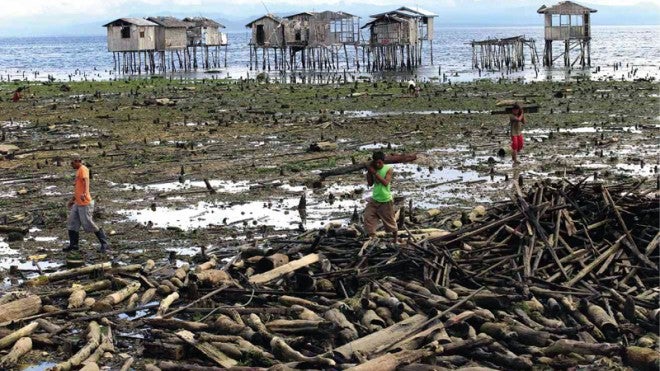 A YEAR AFTER THE BATTLE Damaged houses on stilts still stand on the shore at Mariki village in Zamboanga City, which Moro National Liberation Front rebels torched when government forces thwarted their attempt to seize the city in September last year. A year after the battle, thousands of residents of Zamboanga City remain homeless and in dire need of government help. JEOFFREY MAITEM/INQUIRER MINDANAO

ZAMBOANGA CITY, Philippines – The Commission on Human Rights has said the city government’s handling of residents displaced by the September 2013 siege here was not compliant with domestic and international laws.

But Mayor Ma. Isabelle Climaco Salazar said the CHR lacked understanding of the “unique situation” here and that it should not have issued a “generic” statement.

“It would have been best for the CHR to look into the unique situation of Zamboanga City rather than come up with a swift advisory,” Salazar said during Wednesday’s public forum on the plight of internally displaced persons, which the CHR has organized.

Human Rights Commissioner Jose Manuel Mamauag said they had no intention of maligning the city government and the assessment was the product of consultations.

He cited as an example the city government’s policy of returning the IDPs to their pre-siege condition and not providing them long-term help.

Mamauag added that the city government failed to consult the affected families, especially those displaced with no land titles, and those to be relocated to areas considered new or foreign to them.

Another issue, Mamauag said, has been the city government’s failure to consider the Indigenous People’s Act in the case of the Badjaos.

“The materials and resources provided did not match their habitual way of living and not culturally sensitive,” he added.

Mohammad Taja Arakama, the city local government operations officer, said: “What is the use of having beautiful houses with no livelihood or far from the source of livelihood?”

Mamauag said the CHR did not become reckless in issuing the assessment because the city government had been reminded time and again about its “obligation to address (the problem) in accordance with domestic and international laws.”

But Salazar was furious.

She said the assessment was issued based on the work of “two human rights lawyers who never set foot in Zamboanga.”

Mamauag expressed hope the city government would consider the assessment and work to straighten things up.

As of Wednesday, 22,759 individuals were still in transitional sites and evacuation centers here.