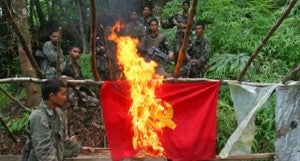 Pacific Asphalt Co. is a contractor for the housing project for Typhoon Pablo victims, which is being funded by the National Housing Authority.

Rojas said the rebels burned a boom truck worth P2 million, a payloader costing P2 million, an Isuzu mixer, and another truck, both worth P1 million each.

No one was hurt during the arson though.

Wednesday’s attack was the latest arson carried out by the NPA in Compostela Valley.

Both the police and the military said the attacks could be the offshoot of the refusal of the equipment owners to give in to the rebels’ extortion demands.