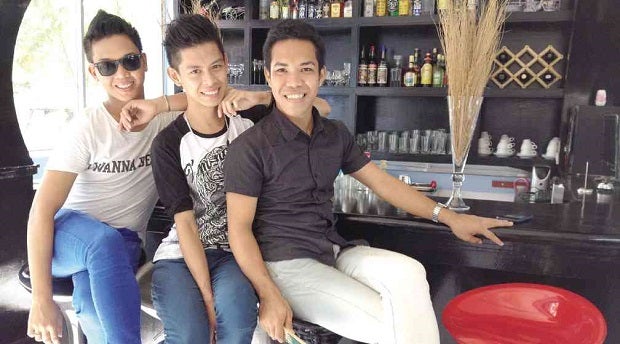 THREE gay friends—(from left) Peter Jupiter Galvez, Ram Mahusay and Momar Javier—overcome fear and trauma at the height of the crisis. They challenged death to save more than a hundred hostages during Zamboanga crisis. JULIE S. ALIPALA

ZAMBOANGA CITY—Momar Javier already accepted his fate that he was “going to die” while being held hostage by Moro National Liberation Front MNLF) forces in Zamboanga City in early September.

“But we needed to do something,” said Javier, 20, a student of Zamboanga State College of Marine Sciences and Technology (ZSCMST).

Javier is one of three young gay men who came out with their best during the worst of times.

Together with Peter Jupiter Galvez and Ram Mahusay, Javier provided food, water and laughter for the other hostages held by the MNLF forces for more than three weeks.

The MNLF forces entered the city, claiming they were instructed to march and hold a rally in front of City Hall where they will declare the independence of the Bangsamoro Republic. Their presence caused panic among residents and armed response from police and government soldiers, leading to a three-week standoff.

“At the height of captivity, these gay students offered comfort to my family. They gave their papag (bed) to my father and sister. They slept on the cold, dirty floor,” Ufana told the Inquirer.

Isidoro said Javier carried the priest whenever the hostages were moved from house to house during the fighting. “I carried him on my back because he could no longer walk,” Javier said in Filipino.

Galvez, 20, was the hostages’ “water girl.” His main responsibility was to provide water for cooking, drinking and for the MNLF men’s morning coffee.

“We were being fired at while drawing water and carrying water containers,” Galvez said in Filipino. “We accepted our death.”

Mahusay, 21, a hotel and restaurant management (HRM) student, was assigned to cook for the over 100 hostages. “I put to good use my HRM course. I cooked and fed the hostages,” he said.

“We also fed the MNLF men,” he added.

Mahusay recalled a day when some hostage-takers brought several kilograms of flour from a burned store. “I made pancakes. We ate pancakes for several days,” he said.

Two of them, Cherry Belarmino and her mother Virginia, said they owed their lives to the three gays.

“They have a happy disposition,” Cherry said in Filipino. “They were not afraid of bullets.”

She said the trio were even ordered to dig graves for those who had died during the standoff.

The gays would joke about seeing fireworks whenever government forces fired mortar shells at night.

But they had experienced the worst on Sept. 13, when soldiers launched an all-out offensive against the MNLF forces in KGK Building on Lustre Street in Barangay Santa Catalina.

Galvez said he hid inside a small refrigerator when the soldiers started firing mortar shells and tear-gas bombs. Javier and Mahusay were crouched under a sink.

“We were told never to get out of the building because we would all be fired at,” Galvez said.

“Whether you are a hostage or a rebel, it no longer mattered at that time,” Ufana said.

His family had decided not to return to Santa Catalina. “We will either sell the property or convert it into a boarding house, but we will never stay there anymore,” Ufana said.

Galvez, Javier and Mahusay, however, went back to their boarding house in nearby Santa Barbara. “I even recovered some of my things, which were scattered on the road,” Galvez said.

For Christmas, Mahusay said he just wanted to be with his family. “I also want to meet (transgender beauty queen) Kevin Balot in person. She is my idol,” he said.

Javier said he wanted a new makeup kit as a Christmas gift. “I love doing other people’s makeup,” he said.

He said he had to “move on” because he wanted to finish his studies. “I am a dean’s lister and I need to maintain my grades. Sometimes, I have bad dreams, but I try to fight it out,” he said.

Galvez, on the other hand, wants to meet celebrity host Vice Ganda. “Ganda is my ever idol and inspiration,” he said.

Galvez already got his gift—a closer bond with his father.

“My father did not accept my being gay. But when I was freed, my father embraced me. And he cried in public,” Galvez said.

College president Dr. Milavel Nazario said she was proud of her students.

“At the height of such tremendous ordeal, they managed to stand out among the others and bounce back. Gays are really gay and strong people,” Nazario said.