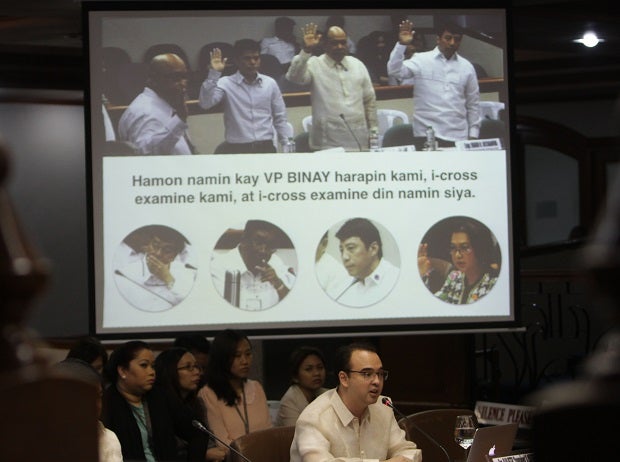 MANILA, Philippines — The lawyer of Makati Mayor Jejomar Erwin Binay Jr. on Thursday tangled with senators over the inquiry into the alleged overpricing of the Makati City parking building contract, standing by his charges they had prejudged his client as guilty.

Lawyer Claro Certeza threatened to bring a case against the Senate Blue Ribbon Subcommittee eventually with the Supreme Court.

“The last resort will always be the court,” Certeza told reporters. But for now, he was deferring to the ruling of the chairman of the Blue Ribbon Committee on his manifestation to suspend the hearing for lack of jurisdiction.

Certeza, however, raised eyebrows when he later held a briefing at the Senate’s Padilla Room reserved by the office of Senator Nancy Binay.

At the hearing, Certeza told senators that the committee has been vested with wide powers, but these have been checked by the constitutional rights of individuals.

Senator Alan Peter Cayetano asked him to cite an instance where his client’s constitutional right had been violated during the hearing.

Certeza tersely responded: “The right to be presumed innocent.” When pressed further, he said that the senators had propounded questions indicating that “my client is guilty.”

Cayetano explained that senators, like Supreme Court justices in their banc sessions, propounded questions that appeared to be either pro or anti, but in the end, surprisingly voted otherwise.

“We have not violated anyone’s right here. We don’t assume anyone is guilty. In aid of legislation doesn’t presume guilt or innocence. But we do make recommendations to the Office of the Ombudsman,” Cayetano said.

Cayetano said a cross-examination in a trial would “show a pattern,” and in the case of the P2.28-billion Makati City parking building, a “pattern of corruption.”

Certeza, a litigator since 1984, asserted that the evidence presented to prove one’s guilt in one instance could not be considered evidence in another instance. Cayetano countered this was only the “general rule.”

Certeza said: “By way of exception, you will prove there is a pattern.”

Cayetano pressed on and asked: “Isn’t it true that you can ask questions that may be irrelevant to the case, but is relevant to proving the credibility of the witness?” Certeza didn’t agree with this.

“You never encountered that in court?” Cayetano said, pointing out that in a paternity case, such questions could be raised.

Certeza countered: “The very essence of the rules of evidence prohibits considering evidences (sic) that are otherwise immaterial or irrelevant, your honor.”

Cayetano said: “I will not debate on that. Everyone knows that.”

Certeza filed a manifestation with the Blue Ribbon Committee asking that all members resolve the issue of jurisdictional challenge, and pending the resolution, the committee should stop the hearings. He argued that the Ombudsman had primary jurisdiction over the plunder complaint against Vice President Jejomar Binay, the father of Makati Mayor Binay, and the members of their family.

At the start of the hearing, Senator Aquilino Pimentel III, chairman of the subcommittee, read a manifestation by the Senate minority bloc, including Senator Binay, asking the committee to suspend the hearing pending resolution of the issue of jurisdictional challenge.

Pimentel ruled that there was no need for the committee to act on it since it was a manifestation, and took note of it. He proceeded with the hearing.

Certeza said he would defer to Senator Teofisto Guingona III, chairman of the Blue Ribbon Committee, to rule on his manifestation. But otherwise, he said the Binay camp would bring a case to the high court.

“If there is a law or right which you feel is being violated, you have a right to go to the court,” he later told reporters in the briefing.

Before letting Certeza go, Cayetano asked him point-blank, “Is it true you reserved the other room for a presscon at 11 o’clock?”

Certeza admitted: “I think that was through the assistance of Senator Nancy.” He said there was a media request for interview with the mayor.

Cayetano corrected him, and said it was the Binay’s camp that reserved the Padilla room, and hence, it was calling the press conference.

“I was just told by the assistant of Senator Binay that there will be an interview,” Certeza said. Pressed, he said he was presenting Mayor Binay, and two others, and admitted his law firm represented Vice President Jejomar Binay.

Cayetano said he had information Certeza was holding the press conference jointly with the Vice President’s spokesperson, Junvic Remulla.

“Let’s not split hairs here. The Vice President and his family want the hearing stopped. That’s the bottom line here, and for our part, we only want the truth to come out,” Cayetano said.

Pimentel read the committee rules to show that a lawyer could only serve to advise a resource person, and Certeza’s oral arguments on behalf of his client should not serve as a precedent.

Then he told Certeza: “You are late for your presscon.”

Senator Antonio Trillanes IV then warned Certeza: “We will be monitoring your presscon. If you disrespect the Blue Ribbon Committee, we will ask you back.’’