MANILA, Philippines – An initial evaluation by a special team of the Commission on Audit (COA) on the controversial Makati City Hall 2 parking building showed that the project was “implemented with undue haste” and “improper,” an auditor told the Senate blue ribbon sub-committee Thursday.

The parking building has been the subject of an investigation by the Senate body amid allegations that it was overpriced. 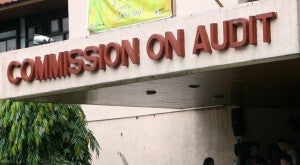 COA auditor Alexander Juliano was initially hesitant to read the initial report of the team, saying it’s supposed to be for “internal consumption” of the Commission and that they have not yet gotten the comment of the city government.

But Senate Majority Leader Alan Cayetano assured Juliano that he would not be violating any law since he was ordered to do so by the sub-committee.

Juliano then proceeded and read before the committee the COA’s initial evaluation of the project, a copy of which was later furnished to reporters.

The following were the amounts spent by the city government for the five-phase construction of the parking building:

The report also showed that the city government spent P75,614, 953.01 for the Building Management System.

Among the findings of the special team was that the project was “implemented with undue haste as there were no construction plans yet when it was bidded out and awarded to Hilmarc’s Construction Corp.”

“It appears that the negotiated procurement adopted by the BAC on the contract of architectural and engineering services as improper because none of the conditions laid down under Section 53 of the Implementing Rules and Regulations of R.A No. 9184 was present such as failed biddings, emergency cases, takeover of contracts, adjacent or contiguous projects, agency-to agency, highly technical consultants and defines co-operation agreement,” the report said.

BAC is bids and awards committee.

The report also noted that that the city started the procurement process for Phase 3 on Nov. 27, 2009 even if there was no appropriation yet.

“The covering appropriation ordinance was only enacted on Sept. 14, 2010,” it pointed out.

“It’s also noteworthy that the BAC resolution recommending approval of the award HCC was made as early as Jan. 8, 2010, however the Notice of Awards was only served to winning bidder on Sept. 21, 2010. Obviously, the Head of the Procuring Entity waited for the passage of the appropriation ordinance before he issued the NOA to HCC.”

The report likewise noted that per COA inspection report dated July 7, 2011 for Phase 3, the parking building was already “habitable and ready for use.”