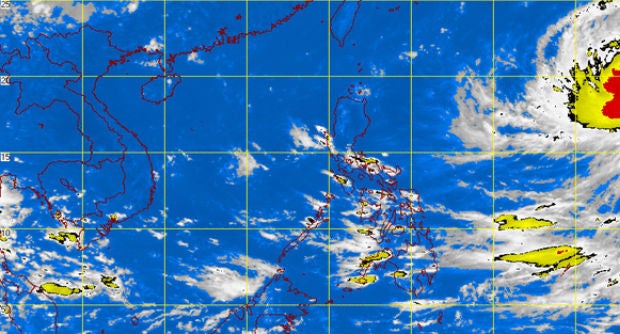 MANILA, Philippines―Typhoon “Phanfone”, which is gathering strength in the western Pacific Ocean, was expected to enter the Philippine Area of Responsibility on Friday, the state weather bureau said.

The typhoon, which will take the name “Neneng” once it enters the Philippines, would not make a landfall in the country, the Philippine Atmospheric, Geophysical and Astronomical Services Administration said.

“It’s possible that it will develop further once it enters the PAR,” Pagasa weather forecaster Chris Perez said.

At 10 a.m., “Phanfone” was spotted 1,620 kilometers east of extreme northern Luzon while tracking a west northwest path toward southern Japan at a pace of 20 kph. It was moving at 150 kph with gusts of up to 185 kph.

Perez said that based on the current track of the typhoon, it was not expected to make landfall and would exit the northeastern part of the PAR on Saturday. It would head toward southern Japan.

He added that thunderstorms may still develop over the country on Thursday afternoon.

On Wednesday afternoon, a thunderstorm drenched much of Metro Manila leaving streets flooded and commuters stranded in massive traffic jams.