Escudero, chairperson of the Committee on Finance, questioned the Department of Budget and Management’s P15-million capital outlay, which Abad said was for the purchase of two motor vehicles at P1.1 million each for the DBM central office and one each for Regions 8 (Eastern Visayas) and 9 (Zamboanga Peninsula) at P1.3 million, among others.

Escudero asked why these were not specified in the budget and whether these required special allotment release order (SAROs). 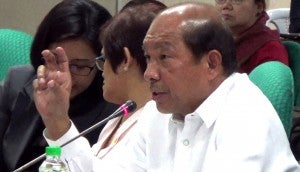 Abad said that a supplementary document that gives the specifics of the purchased equipment was required to be submitted to them before they would release funds.

The document is quite large and very detailed which was why it’s made into a separate supplement.

“Agencies that simply listed generally under capital outlay procurement of vehicles are required to submit for us the specifications of these outlays. The General Appropriations Act (GAA) will not come into effect until their requirements are approved,” Abad said.

Escudero then questioned how the Commission on Audit (COA) would be able to trace the released funds based on the documents in DBM.

Abad said that COA was provided by the DBM with a copy of the documents, which allowed the release of the funds.

“There are so many lump sum items, blind corners, however small they may be it’s still a lump sum simply because we don’t have a copy of [documents] when we approved the budget,” Escudero noted.

He said he wanted to be able to see documents that show where the money went compared to where it was allocated for under the budget.

Abad assured Escudero that they were undertaking a “budget integrity analysis” for 2014, which would compare the enacted budget and the implemented budget.

“We are just embarking on this for 2014. We should be able to present to you a budget integrity analysis by end of 2014,” Abad said.
RELATED STORIES