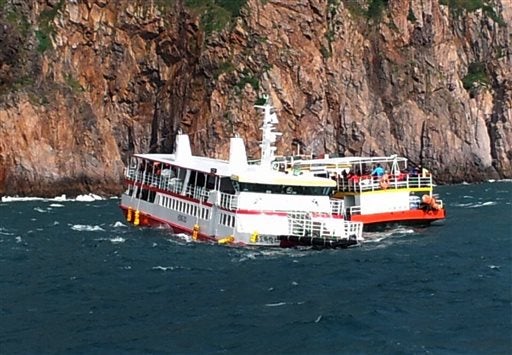 A cruise ship, right, approaches to rescue passengers from another cruise ship that ran aground in waters off the southwestern coast near Hongdo, South Korea, Tuesday. AP

SEOUL, South Korea—A South Korean cruise ship ran aground off the southwestern coast Tuesday but all of the 109 people aboard the vessel have been rescued, coast guard officers said.

The incident came as South Korea is still struggling to deal with the aftermath of April’s ferry disaster that left more than 300 people dead or missing.

The 171-ton ship was carrying 104 tourists and five crew members on Tuesday morning when it struck a rock in the water off the southwestern Jeolla province, coast guard officers said on condition of anonymity citing department rules.

The all 109 people have been rescued by fishing boats, they said.

The officers said the cause of the incident wasn’t immediately known.