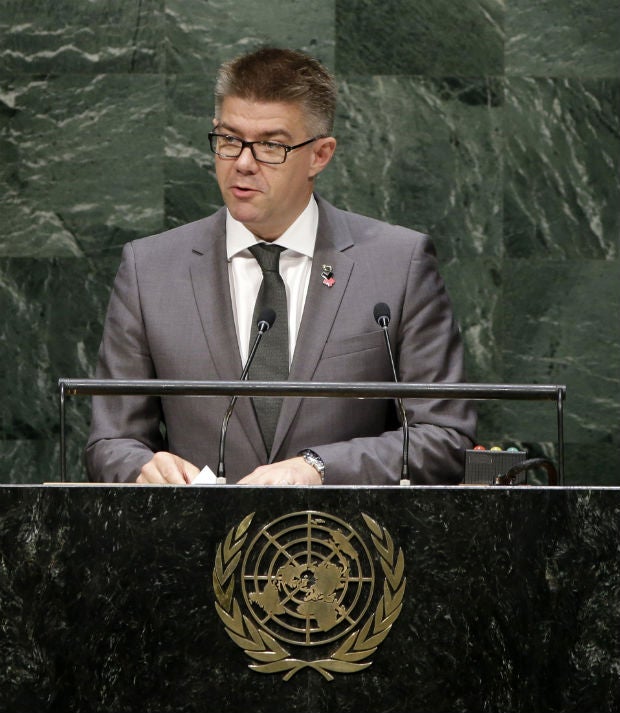 UNITED NATIONS — Iceland is announcing a U.N. conference on women and gender equality — and only men and boys are invited.

The country’s foreign affairs minister told the U.N. General Assembly of world leaders on Monday that the January “barbershop” conference will be unique, “as it will be the first time at the United Nations that we bring together only men leaders to discuss gender equality.”

Gunnar Bragi Sveinsson said the conference convened by his country and Suriname will be an “exceptional contribution” to events marking the 20th anniversary of a landmark U.N. conference on women in Beijing.

“We want to bring men and boys to the table on gender equality in a positive way,” Sveinsson said. He said the meeting will have a special focus on violence against women.

The unusual conference is part of a global campaign launched this month to get 100,000 men and boys involved in the fight for gender equality, which the United Nations had hoped would be achieved by 2015. That deadline won’t be met; in an interview this year, the head of UN Women, Phumzile Mlambo-Ngcuka, said projections indicate that if things don’t change, achieving gender equality will take 95 years.

At the “HeForShe” campaign launch this month, actress Emma Watson explained the urgent need to bring men into the fight for gender equality.

“In 1995, Hillary Clinton made a famous speech in Beijing about women’s rights,” Watson said. “But what stood out for me the most was that only 30 percent of her audience were male. How can we affect change in the world when only half of it is invited or feel welcome to participate in the conversation?”

The 1995 conference featured Clinton, then first lady, galvanizing global leaders with her now-famous declaration that “women’s rights are human rights.” Nearly 190 countries adopted a platform to achieve equality for women, which has become the blueprint for action by the global community on the issue.

Iceland and Suriname are now leading a group of countries to stir up support for gender equality as the anniversary of the landmark Beijing meeting approaches.

Earlier this year, U.N. Secretary-General Ban Ki-moon said Clinton will play an important role in next year’s anniversary celebration, and Clinton said she looks forward to working with Ban on an issue “of such great global importance.”

At a separate event this year, Clinton said that in the nearly two decades since Beijing, “women and girls still comprise the majority of the world’s unhealthy, unfed and unpaid.” She urged the U.N. to include gender equality at the forefront of its new goals to promote development.

Iceland and Suriname fall at nearly opposite ends of global rankings on women’s rights. The Global Gender Gap Report 2013 compiled by the World Economic Forum ranked Iceland top in gender equality in economic, health and other matters. Suriname, the tiny South American country, was ranked 110th.

The Forum hosts the annual gathering of global business and political leaders in the Swiss ski resort of Davos every winter.