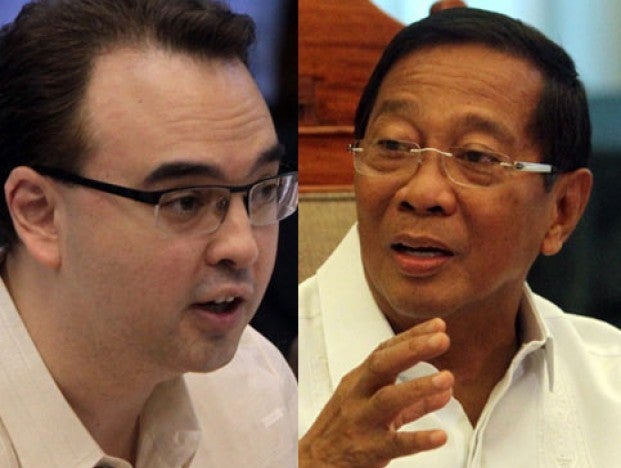 President Jejomar Binay (right) has refused to be drawn into a word war with Sen. Alan Peter Cayetano (left), another probable presidential contender who had said that the economy would suffer if Binay were elected president in 2016. INQUIRER FILE PHOTOS

Cayetano asked Binay to submit a waiver to the secrecy of his bank accounts, as well as present his credit card bills, land titles and bank deposits so these could be scrutinized by the public.

This, he said, would be the “real’’ lifestyle check, as opposed to a mere disclosure of statements of assets, liabilities and networth as Binay has done.

“If we want the real lifestyle check, they should disclose these documents,’’ Cayetano said in a statement.

The Senate Blue Ribbon Subcommittee inquiry into the P2.28-billion Makati parking building that began construction in 2007 when Binay was mayor has spawned allegations of corruption against the vice president.

Former city government officials had testified about Binay and his family allegedly taking kickbacks from construction contracts, and contracts being rigged to favor certain bidders, among others. The Binays have denied the charges.

Binay, who has announced plans to run for president in 2016, skipped last Thursday’s hearing, which he dismissed as a forum to vilify him because he enjoyed high approval ratings in surveys.

Last Wednesday, Binay released his financial statements and income tax returns for the last 28 years, showing that he had accumulated a net worth of P60 million. It was meant to show he wasn’t afraid of a lifestyle check.

Cayetano, however, was unconvinced. He said the vice president should also have presented the SALNs of his children — Mayor Binay Jr., Sen. Nancy Binay, and Rep. Abigail Binay.

“In the SALN, you can’t detect one’s lifestyle. For instance, you declare P5 million in your SALN, but that SALN doesn’t reflect the P100,000 bill you paid in a restaurant, or P5 million expense abroad, or the paintings or antique jars that you keep at home,’’ he said.

Cayetano to Binay: Stop hiding behind your children

Senator Alan Cayetano to VP Binay: Is there or isn’t there corruption?