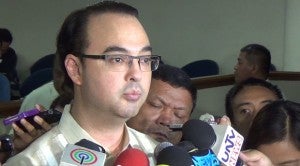 MANILA, Philippines–Instead of hiring more spokespersons or playing the politics card, Vice President Jejomar Binay should just explain how the cost of the Makati City Hall Parking Building reached P2.28 billion, which is supposedly three or four times the price of buildings of the same type, according to Sen. Alan Peter Cayetano.

Binay has denied that the building was overpriced and bucked allegations of his former ally, Ernesto Mercado, that Binay probably received kickbacks from the parking building project because Mercado did so as well.

A Senate blue ribbon subcommittee is going to probe deeper into the assertions of Mercado, a former Makati vice mayor, who admitted receiving kickbacks from phases 1 and 2 of the parking building construction.

Mercado implied that Binay, as the then Makati mayor, had received kickbacks as well.

The committee is also planning during its next hearing on Sept. 4 to issue the invitation to the Vice President to attend the subsequent inquiry, according to Sen. Aquilino Pimentel III.

Pimentel, who chairs the subcommittee handling the probe, said it was possible that the panel may end up recommending the filing of charges against Mercado given his admission, but it would have to get more details on the matter.

But Sen. Antonio Trillaes IV, main proponent of the Senate probe, wants to recommend immunity from suit for Mercado.

Pimentel said he would pursue the matter of Mercado’s assertions about receiving kickbacks in the next hearing.

“I will ask him how much, in what form, how it was sent, who sent it,” Pimentel told reporters.

None of the witnesses have asked for immunity, Pimentel added. Should Mercado apply to be placed under the Witness Protection Program, it would be the justice secretary who would decide on his immunity, he said.

But Trillanes said he would push immunity for Mercado, in the same way that immunity was given to Benhur Luy, whistle-blower in the pork barrel scam.

“We can get to the mastermind in this kind of scam if we will do that,” he said.

Cayetano and Trillanes scoffed at Binay’s denials that the parking building was overpriced and that he had not received any kickbacks.

Cayetano said Binay’s usual refrain when faced with allegations of corruption was that these were just the product of politics, these were connected to 2016 elections and there was no evidence to back these up.

But according to Cayetano, there are actual issues that Binay has not answered and he could do so in the next Senate committee hearing.

Cayetano also said the Commission on Audit (COA) personnel he questioned in the last hearing did not even know what “CFA,” acronym of construction floor area, stood for, when it was important in determining the cost of the building’s construction.

“How can they say it is not overpriced when they don’t know how to compute it?” he said.

He also cited COA Chair Grace Pulido-Tan’s question on why two more phases worth more than P1 billion were added to the parking building construction when after the completion of phase 3, it was already found habitable and ready for use. About P1.5 billion was spent for phases 1 to 3.

“The Vice President is thinking that if he keeps on repeating [his statements], the people will believe him. He believes in the saying that a lie often repeated becomes the truth,” Cayetano said.

As for criticism that the inquiry was conducted by an “anti-Binay committee,” he said the Vice President’s allies were not prevented from attending it.

“But all the evidence shows the building is three to four times more expensive that other buildings of the same type,” he added.

Trillanes said Binay was apparently in “panic mode,” given all his criticism about the hearing and the senators leading the questioning, but he still failed to provide sufficient explanation for the building.

“I think the Vice President is in panic mode, probably because we are getting closer to the truth,” he said.

Trillanes also refused to confirm Binay’s allegation that he had berated a representative of Hilmarc’s Construction Corp., the parking building’s contractor.

He said the Vice President must confirm first that his information came from Hilmarc’s representative.

“If he would say that, it means the Vice President and Hilmarc’s are in cahoots with each other,” he said.

Trillanes also claimed Binay was fooling the people by saying that the COA had found nothing adverse about the project, since it was the COA chair who herself said the agency had issued no clearance for the project and also raised questions about the building’s construction.

Read Next
Cops await LTO word on ‘naked teen’ case
EDITORS' PICK
Heads may roll at BOC, says Palace if sugar smugglers are allowed to use recycled import permits
Palace: Biggest supermarkets in PH commit to sell sugar at P70 per kilo
What to watch out for when selecting a video surveillance solution
House energy committee chair Arroyo bats for cheap electricity
vivo brings to the Philippines a powerful smartphone with a slimmer body, the vivo Y02s for only PHP 6,499
DOH reports increase in daily COVID-19 deaths, mostly unvaxxed
MOST READ
Brian Poe-Llamanzares receives his PhD in Public Administration
Peso loses ground vs US dollar
Alyssa Valdez to miss Creamline’s AVC Cup campaign
Rhian Ramos on new beau Sam Verzosa
Don't miss out on the latest news and information.