Palace scoffs at Binay’s launching of UNA as political party 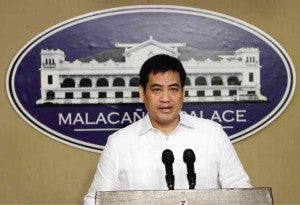 MANILA, Philippines—Malacañang does not see Vice President Jejomar Binay’s conversion of the United Nationalist Alliance (UNA) from an alliance into a political party as a threat to President Benigno Aquino III.

Although he initially refused to make a comment on Binay’s political moves, Lacierda suggested that UNA declare if it was an opposition party or not.

Lacierda said that being a member of a political party different from the President’s Liberal Party would not make one a member of the opposition.

“You’ve got NPC (Nationalist Peoples Coalition), you’ve got NUP (National Unity Party), are they (opposition)? You know, it depends on how they will describe themselves. Far from us to comment if they an opposition or not. They would have to tell the public what kind of a party they are, instead of us,” said Lacierda.