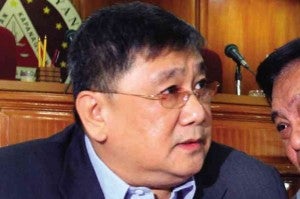 MANILA, Philippines—Associate Justice Jose Hernandez has been named the acting chair of the Sandiganbayan Fourth Division that became leaderless with the dismissal of Associate Justice Gregory Ong on Tuesday, while another justice would be designated as temporary member of the division, Renato Bocar, the anti-graft court’s executive clerk of court, said on Wednesday.

With the appointment, Sandiganbayan maintained that the dismissal of Ong would have no legal effect on the cases being handled by the anti-graft court.

Ong was the chair of the court’s Fourth Division, which was hearing several high-profile graft cases, including the criminal complaints against former president and now Pampanga Rep. Gloria Macapagal-Arroyo and other public officials over the scuttled $329-million national broadband network deal with Chinese telecommunications giant ZTE.

Bocar said Hernandez, being the senior member of the division, would be automatically promoted as permanent chair of the Fourth Division upon the finalization of Ong’s dismissal.

Bocar said Associate Justice Alex Quiroz would be named to replace Hernandez as senior member of the division being the most senior among the junior associate justices.

“There will be no disruptions in the trial of cases in the Fourth Division. (Ong’s dismissal) will have no legal effects on the pending cases being heard by the court,” Bocar said.

The clerk of court said President Aquino would appoint a new justice to succeed Quiroz as a junior member of the Third Division.

Bocar said the Supreme Court’s decision was “self executory” and that there was no need for Presiding Justice Amparo Cabotaje-Tang to convene the court en banc to implement Ong’s dismissal.

Ong, 61, is the most senior among the 14 associate justices of the anti-graft court. He was named justice of the Sandiganbayan on Oct. 5, 1998 by then President Joseph Estrada.

Ong became the first justice of the special court to be dismissed from the service since it was created by a Marcos-era edict on June 11, 1978.

In an earlier interview, Bocar said the dismissed justice might still file an appeal in the Supreme Court within 15 days.

He said Ong could “voluntarily vacate his office and refrain or desist from performing [his] functions as an associate justice of the Sandiganbayan.”

“The ruling of the SC on the case of Justice Ong, while immediately executory, is not immediately final. So he still has the opportunity to file a motion for reconsideration if he so desires,” Bocar told reporters.