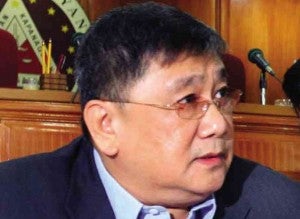 MANILA, Philippines—Dismissed Sandiganbayan Justice Gregory Ong may still file a motion for reconsideration to contest his dismissal by the Supreme Court over his alleged link to accused pork barrel scam mastermind Janet Lim-Napoles.

In a news briefing on Tuesday, the anti-graft court’s spokesperson Executive Clerk of Court Atty. Renato Bocar said the court has yet to receive the dismissal order.

He said while the ruling is executory, it is not immediately final as Ong may still file a motion for reconsideration.

“He still has the opportunity to file a motion for reconsideration if he so desires within 15 days from receipt of the resolution or ruling of the Supreme Court,” Bocar said.

“Now once an official copy is received by court, the presiding justice will probably endorse the same or issue a memo to Justice Ong for the proper implementation of the resolution,” he added.

Bocar said Ong may also opt to voluntarily vacate his office or refrain from performing the functions of an Associate Justice.

“This will only happen if the decision becomes final. While the vacancy is temporary, Justice Hernandez will be acting chairperson only,” Bocar said.

The Supreme Court dismissed Ong after he was found guilty of “gross misconduct, dishonesty and impropriety”.

Voting 8-5-2 or eight in favor of Ong’s dismissal, five against and two abstentions, the high court in a per curiam (by the court) decision said: The “totality of the circumstances of such association strongly indicates (Ong’s) corrupt inclinations that only heightened the public’s perception of anomaly in the decision making process.”

“The decision is immediately executory,” the high court said.

Ong has been accused of attending the parties or any social event hosted by accused pork barrel scam mastermind Napoles.

Ong was also accused of being Napoles’ contact in the Sandiganbayan as he acquitted Napoles over the Kevlar helmet case.