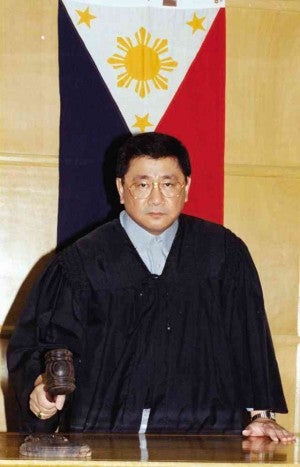 ‘THE INSIDE MAN’ The high court has found Justice Gregory Ong guilty of accepting a payoff to fix the case of Janet Lim-Napoles in her favor. INQUIRER PHOTO

MANILA, Philippines–Except for two who inhibited themselves, all justices of the Supreme Court believe Sandiganbayan Associate Justice Gregory Ong accepted a payoff to fix a case in favor of alleged pork barrel scam mastermind Janet Lim-Napoles but are deadlocked on whether to dismiss or merely suspend him.

An investigation ordered by Chief Justice Maria Lourdes Sereno last January had found Ong guilty of fixing a case against Napoles and several military officials in exchange for money in 2010. The ruling came nine years after the Ombudsman filed the graft case against Napoles et al.

Sereno ordered the investigation after two whistle-blowers in the pork barrel scam investigation, Benhur Luy and Marina Sula, mentioned in a Senate blue ribbon hearing last September that Napoles had the case fixed by a contact in the Sandiganbayan and that they knew that Ong was her contact in the antigraft court.

Retired Supreme Court Associate Justice Angelina Sandoval-Gutierrez, who was tasked to conduct the investigation, found that Ong allowed himself to be Napoles’ contact in the Sandiganbayan and took money to acquit her in the irregular purchase of 500 Kevlar helmets for the Philippine Marines worth P3.8 million.

Gutierrez recommended the dismissal of Ong, chair of the Sandiganbayan Fourth Division that handled the Kevlar case.

“[I]t is respectfully recommended that respondent Justice Gregory S. Ong be found guilty of gross misconduct, dishonesty and impropriety, all in violation of the New Code of Judicial Conduct for the Philippine Judiciary and meted out the penalty of dismissal from the service with forfeiture of all retirement benefits, excluding accrued leave credits, and with prejudice to reemployment in any government office, including government-owned or -controlled corporations,” Gutierrez said in her May 15 report.

Court insiders said Monday that the magistrates were expected to reset the voting as initial deliberations placed the vote even at six each.

“Confidential preliminary court deliberations show six (justices) are inclined to dismiss Ong and six are for suspension only. So the justices may defer voting to another date,” said a court insider privy to the vote but could not be identified for lack of authority to speak on the matter.

“All 12 (justices who participated in the voting) believe Ong is guilty. Seven votes are needed to impose properly,” the source said.

The source did not name the justices in favor of Ong’s removal or those supporting his suspension.

Until they reach a majority vote, the justices are expected to continue deliberations on Gutierrez’s report.

The antigraft court acquitted Napoles and the other accused, including her husband, retired Army Maj. Jaime Napoles, “for failure of the prosecution to prove their guilt beyond reasonable doubt.”

The ruling was handed down nine years after the Office of the Ombudsman filed graft and malversation charges against Napoles and the other officials tagged in the case.

The case was elevated to the Sandiganbayan after the Ombudsman found that Napoles had delivered subpar Kevlar helmets from Taiwan instead of ordering them from the United States, as originally declared in the purchase.

Napoles was also found to have used fake and dummy companies during the bidding to bag the contract. The helmets were delivered two years after the contract was fully paid on Jan. 7, 1999.

In making her recommendations, Gutierrez gave weight to testimonies of Luy and Sula during her investigation, which jibed with their statements at the Senate blue ribbon committee.

Luy and Sula, former employees of Napoles, testified in Gutierrez’s investigation on Feb. 12 that Ong visited Napoles in her Ortigas office at least two times in 2012.

Luy said Napoles had given Ong 11 checks amounting to a total of P3.10 million during one of his visits.

He said since they were cousins, Napoles talked to her about her case in the Sandiganbayan and about Ong, whom she claimed was introduced to her by Sen. Jinggoy Estrada.

Luy said he knew Napoles fixed the Kevlar case because he kept a ledger for the Sandiganbayan case in which he listed all of her expenses, which amounted to P100 million.

He said Napoles had told him that she gave various amounts to different people during the pendency of the case.

Luy said Napoles had also told him that she gave money to Ong, “but she never mentioned the amount.”

Sula recalled how Napoles told her staff not to worry when the pork barrel scam surfaced, citing her contacts in the Sandiganbayan and the Office of the Ombudsman.

Sula said Napoles’ staff also knew that Ong was her inside man in the antigraft court.

In his testimony before Gutierrez during her investigation, Ong denied fixing the case and belied the whistle-blowers’ testimonies.

He said he visited Napoles only once to thank her for helping him meet a former parish priest of Quiapo church so he could touch the robe of the Black Nazarene as part of his devotion.

SC divided on what penalty to impose on Justice Ong