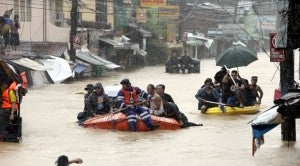 By 6 a.m. Friday, Paraños and her three children were already on their way to an evacuation center near their home in Tumana village. It was about the same time the Marikina city government ordered the evacuation of people living near Marikina River, where the water level had risen to 18 meters.

“We are afraid that another Ondoy tragedy will happen to us,” Paraños told the Inquirer in a classroom at Concepcion Integrated High School, where her family and a thousand others had been evacuated.

Paraños, 38, said that during Ondoy, she and her then2-month-old son sought refuge on the roof of their two-story shanty on Palay Street, which was near a creek.

She said they stayed up there for more than 24 hours without food or drinking water.

Fear of a repeat of that experience made Paraños respond quickly to yesterday’s order to evacuate as heavy rains from Tropical Storm “Mario” (international name: Fung-Wong) and seasonal monsoon flooded Marikina and much of Metro Manila and surrounding provinces.

Zharina Biong, a staff member at the disaster management unit of the Marikina city government, said more than 27,000 people, most of them living near the swollen Marikina River, had been evacuated since dawn yesterday.

It was not clear whether among the evacuated were the eight children of Lorna Manlises, a vendor from Tumana who told the Inquirer that the kids, including a sick 9-year-old girl, were already on the roof of their house, which stood on the bank of a creek, when she left for the market early yesterday.

The Inquirer tried to reach one of the children’s mobile phone but it seemed to be out of coverage.

Rescue teams said they were trying their best to reach the Manlises home using their rubber boats.

The massive flooding shut down private and government offices, schools, courts and financial markets in the metropolis and sent thousands of residents in low-lying areas to evacuation centers.

The Metropolitan Manila Development Authority (MMDA) said 20 to 25 percent of the metropolis was submerged in floodwaters because of incessant rains.

MMDA Chair Francis Tolentino reported that 15 percent of roads in the capital were rendered impassable to small vehicles by the massive flooding.

NDRRMC Executive Director Alexander Pama said 10,852 families or 40,039 people were staying in 63 evacuation centers and 1,297 families or 6,108 people were seeking shelter in other places as of 2 p.m. Friday.

The Department of Social Welfare and Development (DSWD) gave higher figures. It said 13,247 families or 61,167 people were staying in 146 evacuation centers in Central and Southern Luzon, Bicol Region, Central Visayas and Metro Manila as of 3 p.m. Friday.

The Armed Forces of the Philippines sent out humanitarian assistance and disaster response teams to help rescue people trapped by rising floodwaters in Metro Manila.

In Manila, Mayor Joseph Estrada said some parts of the capital were flooded overnight and residents in a number of slum communities were evacuated to safety, but added that floodwaters were receding because major drainage pipes had been cleared of trash before the onset of the rainy season.

A 2-year-old girl and a 34-year-old man drowned while another man was reported missing in separate incidents as floodwaters rose in Quezon City, where 25 villages were inundated.

A medical student of the University of Santo Tomas, Siegfrid Nathan Arcilla, 18, was killed by a live wire dangling outside one of the gates of his school.

Elmo San Diego, chief of the Quezon City Department of Public Order and Safety, identified the two other fatalities as Andrea Gaviola, from Silangan village, and JR Taganas, from Apolonia Samson village.

Also reported injured late yesterday were a 29-year-old woman and a 9-month-old baby girl in Navotas City and an 11-month-old girl in San Mateo town, Rizal.

Mario, with maximum winds of 85 kilometers per hour and gusts of up to 100 kph, made landfall over the northern tip of Cagayan province at 11 a.m. yesterday, but monsoon rains had been pouring in Metro Manila and surrounding areas since Thursday night.

Weather forecaster Aldczar Aurelio said 268 millimeters of rain fell over Metro Manila over a period of 24 hours ending early yesterday. That was more than half of the amount of rain that caused massive flooding across the metropolis during Ondoy in 2009, Aurelio said.

The Mario rainfall, however, is almost equivalent to a month’s rainfall and Aurelio categorized it as heavy rainfall.

Average rainfall for the month of September is 451.2 mm in Metro Manila.

But the red warning in the metropolis, Bulacan, Pampanga, Rizal and Cavite provinces was lowered to orange, indicating only the threat of floods, by early evening.

As of 6 p.m. on Friday, only Zambales, Bataan, Tarlac and Nueva Ecija provinces remained under red rainfall alert.

Laguna, Batangas and Quezon provinces were under yellow alert, indicating the possibility of flooding in low-lying areas.

Rains were expected in Metro Manila up to late Friday night, and better weather was expected early Saturday.

In Northern and Central Luzon, it would rain heavily until Saturday night, Aurelio said.

As of 4 p.m., Mario’s peak sustained winds were 75 kph, while its gusts reached 90 kph. The storm was moving slowly at 19 kph

Pagasa said Mario would be 216 km northwest of Itbayat, Batanes province, by today and 499 km north of the island town, outside the Philippine area of responsibility, by tomorrow.

Public storm signal No. 1 was up over the provinces of Aurora, Quirino, Nueva Vizcaya, Ifugao, Benguet, Ilocos Sur and La Union.

More than 2,400 sea travelers were stranded at ports in Southern Tagalog and Bicol with the suspension of interisland ferry sailings forced by the storm.

Incessant rains brought the water level at La Mesa Dam in Quezon City to spilling level, rising to 43 centimeters above the critical mark.

The dam starts to spill excess water when the level reaches 80.15 meters.

Ipo Dam in Bulacan, the source of La Mesa Dam, threw two gates open at 2 p.m. when the water level reached 73 centimeters above the spilling level of 101 meters.

Other dams in northern and Central Luzon like Binga in Benguet province and Bustos in Bulacan also released water as the reservoir levels reached critical point due to the heavy rains.

In Isabela province, the water level at Magat Dam was recorded at 189.93 meters at 11 a.m., approaching the spilling level of 190 meters.

In Nueva Ecija, police said farmer Oscar Arreza, 45, of Cabubulaonan village in Talavera town, was reported missing after he was swept away by the strong current while he was trying to pull his carabao out of the Talavera-Pampanga River.

In Ilocos Norte, the municipal disaster council in Adams reported that a landslide blocked a section of the road leading to the town.

Cebu in state of calamity

In Cebu province, the local government placed the city under a state of calamity to hasten the implementation of drainage improvement projects that would prevent a repeat of Thursday’s flooding that submerged a large part of the city.

Vice Mayor Edgar Labella said, however, that there was no need to allocate calamity funds because there were no lives lost and there was no damage to infrastructure.