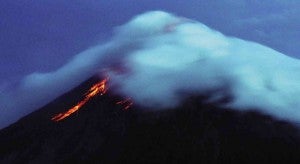 FILE PHOTO: Hot glowing lava cascades down Mayon Volcano in this shot taken from Legazpi City in Albay province. Authorities have evacuated thousands of residents at the foot of the country’s most active volcano in anticipation of a possible deadly eruption within weeks, according to Phivolcs. Safe areas for viewing have been designated for tourists who are expected to come in droves like in the 2009 eruption. AFP

LEGAZPI CITY, Philippines—Volcanic activities have slowed down on Mt. Mayon but the possibility of a hazardous eruption remained, according to the Philippine Institute of Volcanology and Seismology (Phivolcs).

Despite earlier fears that Tropical Storm “Mario” would loosen lahar flow from the volcano, an official from the Albay Public Safety and Emergency Management Office (Apsemo) said no such flow occurred in Barangay Maipon in Guinobatan, Albay province.

The volcanologist said the number of volcanic quakes and rockfalls was an indicator of magma movement and the slow extrusion of magma on Friday indicated “a lessening of Mayon’s activity.” Despite that, the possibility of an imminent eruption remained, he added.

“In the history of Mayon, once the lava dome has been noted at the surface, [the volcano] will erupt,’ Laguerta said.

An updated report from the National Disaster Risk Reduction and Management Council (NDRRMC) showed that at least 6,766 families, or 27,755 people, had been evacuated to 27 evacuation centers as of Friday, as volcanic earthquakes and rockfalls from Mayon continued over the last 24 hours.

The evacuated families came from Camalig, Guinobatan, Daraga and Malilipot towns, and Ligao and Tabaco cities, all within the 6-kilometer permanent danger zone (PDZ), according to NDRRMC Executive Director Alexander Pama.

The update also quoted the Department of Social Welfare and Development (DSWD) as saying it had provided evacuees with P6,670,508.93 worth of family food packs, assorted food items and nonfood items, and pre-identified 2,142 evacuation centers in Camarines Sur, Camarines Norte, Albay, Catanduanes, Sorsogon and Masbate provinces.

Phivolcs raised alert Level 3 over Mayon on Monday and warned of a dangerous eruption within weeks after it noted magma rising to the top of the volcano and “rolling incandescent rockfall” on its slopes.

Cedric Daep, Apsemo head, however, noted that “floodwater with minor sediments” was released after the river overflowed its banks and reached the road in Maipon on Thursday night.

“Phivolcs does not classify it as lahar flow, only floodwater with minor sediments, rocks and boulders,” he explained.

Guinobatan Mayor Ann Gemma Ongjoco, in a phone interview, said they had cleaned the road and extracted up to 50 cubic meters of sand.

Evacuees from Barangay Doña Tomasa in Guinobatan complained of overcrowding, as up to 15 families were sharing a room at Guinobatan West Central Elementary School.

School principal Eden Cardoso explained the “overcrowding” and said up to 15 families were made to share a room so classes could continue. She said the evacuees were consulted on this.

She said there would be a shifting of classes; pupils in Grades 1 to 3 would use the classrooms in the morning and pupils Grades 4 to 5, in the afternoon.

Eliza Olavario, 64, said that while she felt safe in the school, she found it difficult to cope with the lack of privacy. Lorna Armenta, 44, said mosquitoes made for uncomfortable sleep and they could use some mosquito nets and blankets.

Daep said the United Nations Children’s Fund (Unicef) had pledged at least 105 tents to be used as temporary classrooms for children who were evacuated and that the Department of Education was planning to designate teachers to facilitate classes in the 61 school camps. This would ensure that students could continue schooling even if they needed to stay in evacuation centers for months, the Apsemo official said.

According to the latest records of the Provincial Disaster Risk Reduction and Management Council, a total of 9,501 families or 45,499 people had been evacuated from the municipalities of Guinobatan, Malilipot, Camalig, Sto. Domingo, Daraga and the cities of Ligao and Tabaco.

Antonio Basanta, officer in charge of the provincial veterinarian office, said at least 19,931 livestock from the 6-km danger zone would be transferred to various rescue centers on Monday. These include 2,588 carabao, 2,301 cattle, 7,971 swine, 438 goats or sheep, and 6,633 dogs.

Nathaniel Rempillo, of the provincial health office, said they had set up health centers in every evacuation center and distributed over-the-counter medication like paracetamol, antibiotics and antidiarrhea tablets, as well as filtration machines and over 12,000 liters of drinking water.

Yolanda Guanzon, head of the Provincial Social Welfare and Development Office, said they had provided more than 8,000 sets of starter kits consisting of mats, blankets, mosquito nets and blankets.

A 24-hour curfew is now being implemented within the 6-km PDZ after the evacuation was completed, according to Col. Raul Farnacio, commanding officer of the 901st Infantry Brigade, who said no human activity would be allowed within the PDZ.

The Social Action Center (SAC) of Legazpi City and its microfinance institution, Socioeconomic Development Program, said it had decided in a coordination meeting with Daep to complement the efforts of the local government to help evacuees.

Where tourists can view glowing lava