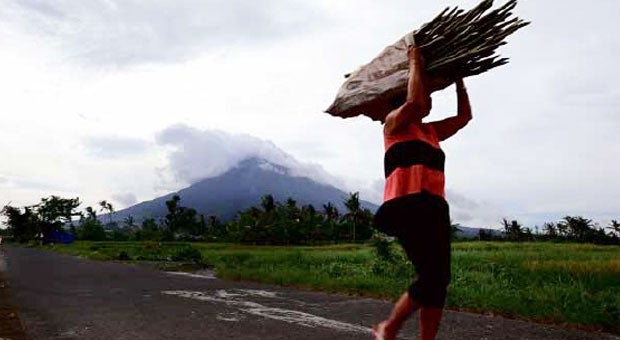 BUSINESS AS USUAL Life goes on for residents of Barangay Mabinit, Legazpi City, which is in danger of pyroclastic flow with the raising of Mayon Volcano’s alert level to 3. Mabinit has been identified as one of the villages belonging to the 8- to 10-kilometer extended danger zone in the city. MARK ALVIC ESPLANA/INQUIRER SOUTHERN LUZON

MANILA, Philippines–Residents of Albay province living near Mayon Volcano are facing a double whammy—the threat of a major eruption and rains brought by Tropical Storm “Mario” (international name: Fung-Wong) and enhanced by the southwest monsoon.

The Philippine Atmospheric, Geophysical and Astronomical Services Administration (Pagasa) said towns in the province were vulnerable to lahar flows and ashfall, noting that the monsoon was concentrated over the Bicol region and Eastern Visayas.

However, Albay Gov. Joey Salceda said that so far, the incessant rains in Albay were unlikely to dislodge ash and debris deposits from the slopes of the restive Mayon.

“The accumulated rainfall [on Wednesday] night was less than 52 millimeters, not enough to mobilize debris at the foot of Mayon, as we have studied the movements of Mario. I think it would not harm us,” he said.

As of 10 p.m. on Thursday, Mario was spotted 436 kilometers east of Baler town, Aurora province, with maximum winds of 65 kilometers per hour and gusts of up to 80 kph, moving west-northwest at 26 kph.

Mario is expected to make landfall on Friday afternoon in the vicinity of Sta. Ana town, which is in the northern part of Cagayan province.

The weather bureau hoisted Signal No. 2 over Cagayan (including Calayan and Babuyan groups of islands), Isabela, Kalinga, Apayao, Abra and Ilocos Norte.

At a press briefing on Thursday, Pagasa Deputy Administrator Landrico Dalida said Mario, enhanced by the southwest monsoon, would bring rains that could dislodge lahar deposits on the slopes of the volcano.

The permanent danger zone radius has to be extended from 6 km to up to 10 km to prepare for such an event, the Pagasa official said.

Despite two days of continued rains, disaster officials, aided by soldiers, moved nearly 40,000 residents away from the immediate danger zones while Mayon has continued to show heightened restiveness.

At a press briefing, Laguerta said the flux showed possible “vulcanian eruption” within weeks that would cause hazardous volcanic flows cascading down the slopes of Mt. Mayon and into populated areas.

As of Thursday, 38,119 people from 7,575 families had been evacuated from Guinobatan, Malilipot, Camalig and Daraga towns and the cities of Ligao and Tabaco.

Salceda said almost 100 percent of the target affected families within the 6-km radius permanent danger zone and the 6- to 8-km extended danger zone had been evacuated.

The Office of the Civil Defense-Bicol director, Rafaelito Alejandro, said that after the evacuation of residents within the danger zone, livestock would be targeted for relocation on Friday.

Alejandro said some 35,000 livestock as well as dogs would be moved to designated areas.

“After the people, we have to evacuate the animals,” he said, explaining that the animals were the reason evacuees risk returning to danger zones.

If Mayon erupts this month when the southwest monsoon is in effect, ashfall would affect Malilipot, Malinao, Tiwi and Sto. Domingo towns, and Tabaco City, according to Cedric Daep, head of the Albay Public Safety and Emergency Management Office.

If the eruption happens in October, when the northeast monsoon is in effect, Ligao City and Daraga, Camalig, Guinobatan, Oas, Polangui, Libon, Jovellar and Pio Duran towns would be affected.

“The range of the ashfall depends on the high-altitude wind direction and the wind speed, based on the monitoring of Pagasa,” he said.

Daep said this kind of eruption would have an explosion of ash moving upward before moving downward, creating pyroclastic flows around Mayon like octopus tentacles, which would flow down river channels leading to the three cities of Legazpi, Ligao and Tabaco, and Daraga, Camalig, Guinobatan, Malilipot and Sto. Domingo towns.

“Its hazard is carbon monoxide, which is very lethal. The ash flow surge is eight to 12 times the boiling point. So the heat would destroy properties and lives,” he said.

Daep said lava was no threat to life but would affect properties and agriculture. It was moving about 4 to 5 meters a day and would affect Legazpi City, Daraga and part of Sto. Domingo, areas in the southeast quadrant of Mayon.

If there is rainfall in the event of an eruption, all river systems would be affected by lahar, with all deposits mobilized by at least 60 mm of rainfall per hour, he said.

But with the new deposits of pyroclastic materials, debris could be dislodged, even with less than 60 mm of rainfall, Daep said.

In the event of a “strombolian eruption,” only the southeast quadrant including Legazpi City, Daraga and part of Sto. Domingo would be affected. Rocks, boulders and lava would go down to an area about 2 to 3 km away.

Strombolian eruption is a relatively low-level volcanic eruption consisting of the ejection of incandescent cinder and lava bombs to altitudes of tens to hundreds of meters, he said.–With reports from Julie M. Aurelio in Manila, and Delfin Mallari Jr. and Michael Jaucian, Inquirer Southern Luzon