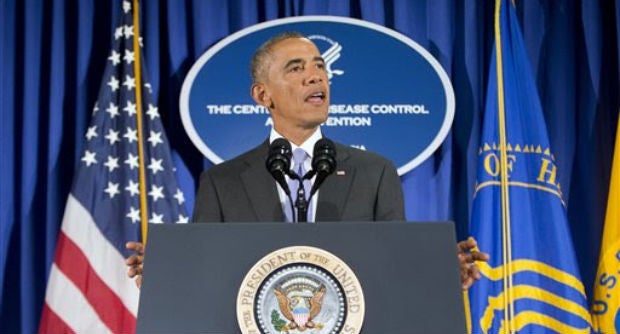 President Barack Obama speaks at the Centers for Disease Control and Prevention (CDC) in Atlanta, Tuesday, Sept. 16, 2014. Obama traveled to the CDC, to address the Ebola crisis and announced that he is sending 3,000 American troops to West Africa nations fight the spread of the Ebola epidemic. AP

GENEVA — The number of Ebola cases could start doubling every three weeks in West Africa, the World Health Organization said Tuesday, warning that the outbreak will cost nearly $1 billion to contain so it does not turn into a “human catastrophe.”

Even as President Barack Obama is ordering the deployment of 3,000 U.S. military personnel to help provide aid in the region, Doctors Without Borders said the global response to Ebola has been far short of what is needed.

“The response to Ebola continues to fall dangerously behind,” Dr. Joanne Liu, president of the medical charity, told a U.N. special briefing on Ebola in Geneva. “The window of opportunity to contain this outbreak is closing. We need more countries to stand up, we need greater deployment, and we need it now.”

The numbers are staggering: At least 2,400 deaths have been blamed on the outbreak, which has touched Liberia, Sierra Leone, Guinea, Nigeria and Senegal since it was first recognized in March.

Half of the nearly 5,000 cases occurred in the last three weeks, and officials said Tuesday that it was not unthinkable that 20,000 could become infected before the outbreak is over.

“It’s a potential threat to global security if these countries break down,” Obama said, speaking of the hardest-hit countries of Liberia, Sierra Leone and Guinea

“If the outbreak is not stopped now, we could be looking at hundreds of thousands of people affected, with profound economic, political and security implications for all of us,” he said after outlining new steps being taken by the U.S. to contain the outbreak.

In addition to the troop deployment, the heightened U.S. role in West Africa will include erecting new treatment and isolation facilities, training health care workers and boosting communications and transportation support, U.S. officials said in Washington.

Hundreds more international health workers will likely be required. Some 3.3 million hazard suits will be needed in the next six months to protect those caretakers from the virus, which is spread by contact with bodily fluids such as blood, urine or diarrhea. Some $23.8 million alone will pay burial teams and buy body bags, since the bodies of Ebola victims are highly infectious.

In a report released Tuesday, WHO said all of this and more will cost $987.8 million. That’s 10 times what the organization estimated the outbreak would cost at the beginning of August.

“We risk a humanitarian catastrophe if we do not see rapid action to scale up, not just the Ebola response but also the provision of essential services and the support platform to put that in place,” Aylward said.

Recent weeks have seen a flurry of promises of aid.

“The question is translating these commitments into quick action on the ground,” said Dr. Unni Krishnan, head of disaster preparedness and response for the aid group Plan International.

Still, hospitals and clinics in West Africa are now turning the sick away because they don’t have enough space to treat everyone — a sure-fire way to increase the spread of the disease, which in this outbreak is killing about half of those it infects.

The United States, in particular, drew criticism last week when it promised to set up a 25-bed field hospital in Liberia to serve health care workers, both local and foreign, who become infected. Many thought the contribution was paltry, given that experts were saying Liberia needed at least 500 more treatment beds.