The man who never ran out of ideas 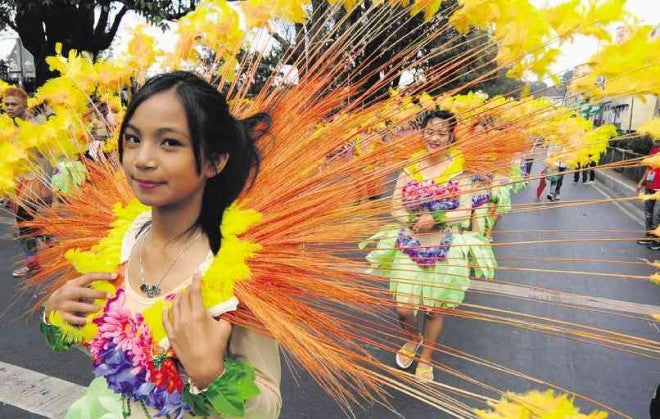 THE BAGUIO Flower Festival helped draw tourists back to the summer capital in the 1990s. EV ESPIRITU

“The City of Baguio mourns the brainchild of Panagbenga. He will always be remembered because of his passion to bring the city back on the map,” said Deborah Ruth Bugnosen-Madrid, a child evangelism fellowship worker and Bangaoet’s godchild, in a post on the social networking site, Facebook.

Bangaoet and his wife, Laurel, were in California to visit his sister, Angel, and were scheduled to visit other relatives in Texas.

“But on their fourth day there, he had sudden pain, vomited blood and started deteriorating after that,” daughter-in-law Aisha Bangaoet said in a text message. She said her father-in-law succumbed to sepsis at the Whittier Hospital in Los Angeles at 5:50 a.m. (Philippine time) on Monday. Bangaoet was 74.

Known for his creative ideas, Bangaoet helped put the city back on the tourism map when local business was in bad shape.

More than 18 years ago, visitors had no good reasons to go to Baguio City, the summer capital, in February. Some did for the sake of their children or relatives who studied at the Philippine Military Academy, the country’s premier military school.

Otherwise, February was a lean month for local entrepreneurs.

Many thus acknowledged the genius behind what was to be called the Panagbenga (Kankanaey term for a season of blooming), which was launched in February 1996. At that time, the city was reeling from the devastation wrought by a 7.7-magnitude earthquake in July 1990, which practically drove away tourists.

Only trickles would come in the mid-1990s, even during the peak seasons, such as Christmas and Holy Week.

All that changed after Panagbenga, a festival meant to celebrate the blooming of flowers. Eventually, visitors started coming. In due time, more hotels, restaurants and other establishments sprouted to cater to the thousands of people visiting the city for the month-long festival.

And that was precisely how lawyer Bangaoet envisioned it in 1995 when he proposed the idea of holding the Panagbenga to the board of directors of John Hay Poro Point Development Corp. (JPDC). He was then the firm’s vice president.

He saw something appropriate for Baguio as a tourism destination and a university town. He had thought that the mountain city, being known for its flowers (which actually come mostly from nearby La Trinidad town in Benguet province), could come out with a “family-oriented” event and, at the same time, boost the flower industry and tourism.

He helped run the festival from its launch in 1996 to 2002, making Panagbenga one of the most recognized Philippine festivals.

Bangaoet had not been in the spotlight for years now, after taking a backseat to professional hotel and restaurant managers who now run the festival.

But he became the festival’s amiable backseat driver, who guided his successors at the Baguio Flower Festival Foundation Inc. (BFFFI) through problems that the successful Panagbenga sometimes generates.

Among other causes, Bangaoet advocated for health, wellness and the environment.

For example, he made sure that the Baguio General Hospital and Medical Center (BGHMC), premier public hospital not only for Baguio but for Northern

Luzon, should not only be a facility to treat patients.

He helped ensure that the 400-bed hospital becomes “a wellness center.”

As chair of the BGHMC board, a position he held until his death, Bangaoet pushed for the upkeep and improvement of the almost a hectare BGHMC Gardens, a series of small gardens adorned with trees and flowers.

The BGHMC Gardens are among the few treasures in this overly developed city of over 300,000, where remaining open spaces and parks continue to be threatened by concrete and asphalt.

Under his leadership, the BGHMC advisory board has asserted that the hospital retain its gardens, the only medical facility in Baguio with such an open space.

“Plants and trees have the power to help heal people,” Bangaoet said, adding that maintaining, sustaining and enhancing the gardens help fulfill BGHMC’s role as a “rejuvenation and wellness center.”

Since February 2012, when the BGHMC Gardens project was launched, some families, groups and institutions have committed to add more trees, plants and flowers in some spaces.

But Bangaoet had said the gardens need more volunteers, particularly in planting more appropriate trees, plants and flowers, and helping maintain them.

Bangaoet’s talents included the performing arts. In 2008 and 2009, he and wife, Laurel, directed the musical, “Joseph the Dreamer,” which was based on the life of Old Testament biblical character, Joseph.

The proceeds from the musical were used to help fund social ministries of the United Church of Christ in the Philippines-Baguio.

Bangaoet was also the brains behind a concert featuring a 200-voice choir, which was held at CAP (College Assurance Plan) John Hay Convention Center in 2000. Various members of Protestant, Evangelical and Roman Catholic churches joined the choir, featuring Christmas hymns and carols.

But beyond all his public and social engagements, Bangaoet was a doting father and grandfather.

For granddaughter Patricia Bangaoet-Bernardo, her grandfather will continue to inspire her. “You’ve always thought of others before yourself and would always go beyond what is expected of you,” she said. “I’m going to miss all our long conversations, all your hugs, all the advice you gave and all the times you’d tickle me when you’d wake me up for school… I am so grateful to be your granddaughter.” With a report from Vincent Cabreza