MANILA, Philippines – Another vehicle in the viral photo that showed the robbery and abduction incident on Epifanio delos Santos Avenue (Edsa) recently was recovered by the authorities, police said on Tuesday.

Allegedly owned by one of the suspects in the incident, which has come to be called “hulidap”, dismissed Police Inspector Marco Polo Estrera’s light blue Honda Civic, with plate number ZJB 149‎, was turned over to the Quezon City Police District (QCPD) from a car repair shop in Novaliches.

Estrera was among the La Loma policemen who purportedly took part in the Edsa heist in the guise of an anti-illegal drugs operation‎ last September 1, which was photographed by a concerned motorist who uploaded it on social media.

Chief Superintendent Richard Albano, QCPD Directo‎r, said in a press briefing that the vehicle was not registered under Estrera’s name, but under Golden Arches Development Corporation. 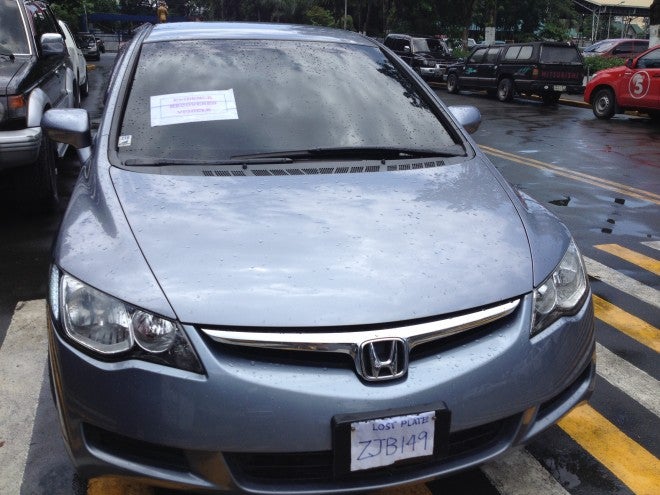 Senior Superintendent Procopio Lipana, QCPD Deputy Director for Operations, said that intelligence personnel were tipped off about the auto repair shop where Estrera’s car was brought.

Arnold Reyes, the auto shop caretaker‎, said that Estrera brought the car a day after the Edsa incident “supposedly for repair.”

“Reyes apparently did not know that the said vehicle bears the same plate number with that of the Honda Civic that was seen in the viral photo so the vehicle was surrendered to the police,” Albano said in a separate statement.

Police then found that it was registered under Golden Arches Development Corporation with business address at 17th floor Citibank Center on Paseo de Roxas Avenue in Makati City.

Albano, however, clarified that the Honda Civic was not included on the nationwide list of stolen‎ motor vehicles.

“The same vehicle will also be subjected to macro etching examination to determine whether or not the engine chassis number and the alternate number were tampered,”‎ he added.

Another vehicle that was seen in the photo surrounding the white Toyota Fortuner, a silver gray Toyota Hiace van with conduction sticker YF 9767, had been recovered by the Eastern Police District.

Of the nine policemen tagged in the “hulidap” case, Estrera, who was dismissed from service in 2006, and alleged mastermind Senior Inspector Oliver Villanueva remain at large.

Suspects in Edsa robbery rise to 12