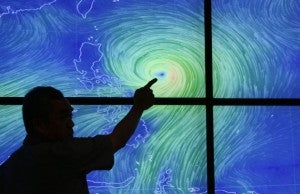 MANILA, Philippines – Although Typhoon “Luis” made quick work of its stay in the Philippines, five people died in its wake.

In its Tuesday report, the National Disaster Risk Reduction and Management Council said that the two new fatalities were drowning victims in Pangasinan.

NDRRMC, in its report, said that Rogellio Sayan, 74, died when strong currents in Barangay (village) Alibeng, Sison, swept him. His remains were found in Barangay Camangaan, Binalonan.