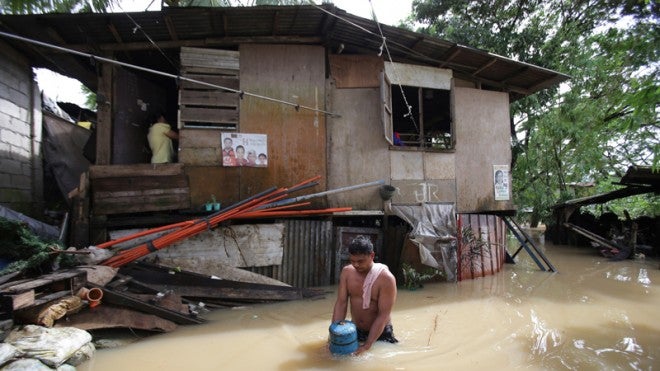 A Filipino wades through floodwaters as residents who earlier evacuated due to a swollen river return to their homes in suburban Quezon city, Philippines Monday, Sept. 15, 2014. Fast-moving typhoon Kalmaegi blew out of the northern Philippines Monday after causing flash floods and landslides. Three people died when big waves and strong winds sank a stalled ferry over the weekend. (AP Photo/Aaron Favila)

MANILA, Philippines–Except for a missing person in Pangasinan province, Typhoon “Luis” left northern Luzon on Monday with minimal damage after it dumped heavy rains on Cagayan Valley, and the Ilocos and Cordillera regions, officials said.

Most local governments in central and northern Luzon had prepared for the typhoon and had evacuated families. Schools in five regions, including Central Luzon and Metro Manila, were suspended on Monday.

Rains triggered landslides that blocked major roads in upland Cordillera provinces like Benguet, Kalinga, Apayao and Mt. Province, but no casualties were reported.

The landslides toppled electric posts and cut power lines, leaving parts of Cagayan, the Cordillera and Baguio City without power since Sunday night.

But Luis (international name: Kalmaegi, Korean word for seagull) spared most farms, particularly in Isabela province where it made landfall.

The eye of the typhoon was over the West Philippine Sea some 455 kilometers west of Laoag City shortly after midday, moving northwest toward southern China at 30 kilometers per hour, the weather bureau said. It was packing sustained winds of 120 kph and gusts of 150 kph.

Even with the typhoon gone, the southwest monsoon will still bring occasional rains over Bataan, Zambales, Palawan and Mindoro provinces, and isolated rain showers or thunderstorms over the rest of Luzon, including Metro Manila, according to the Philippine Atmospheric, Geophysical and Astronomical Services Administration (Pagasa).

As of Monday, 837 families—or 4,493 persons—had been brought to evacuation centers, while 68 families—or 340 people—were staying outside the centers.

“In our meeting with the National Disaster Risk Reduction and Management Council, there were no casualties reported so far from Typhoon Luis. Our regional disaster needs assessment teams will be sent to check the damage sustained,” Social Welfare Secretary Corazon Soliman said in a press conference in Quezon City.

Unlike in the past, local government units are now better prepared for disasters, said Interior Secretary Mar Roxas.

In Pangasinan province, police said Edmundo Dimatulak, who was driving a motorcycle, was swept away by strong current while he crossed a river in Barangay (village) Don Matias in Burgos town at 11:20 p.m. on Sunday.

As of 11:30 a.m., two national roads remained closed to light vehicles. These are the Manaoag-Urdaneta City Road and Mabini-Burgos Road, which connects Pangasinan to neighboring Zambales province.

In a flood bulletin, the Agno River Basin Flood Forecasting and Warning Center in Rosales town warned residents along the province’s river systems on the possible swelling of rivers because of the rains.

It said the swelling of tributaries of the Tarlac and Camiling rivers in Tarlac province may cause flooding in low-lying areas in the towns of San Manuel, Gerona, Paniqui, Moncada, Sta. Ignacia and Camiling and Tarlac City.

Some 129 families from villages in the towns of San Clemente and Paniqui were evacuated, said Marvin Guiang, Tarlac PDRRMC executive officer.

He said some P1.2 million worth of palay had been destroyed by floodwaters.

In Dagupan City, at least three low-lying villages were flooded on Monday.

Some fishpond owners in the city’s Barangay Bonuan Binloc harvested their stocks and sold them at P50 a kilogram, about half the prevailing bangus price, as their ponds threatened to overflow because of the heavy rains.

Ilocos Norte Gov. Imee Marcos suspended classes in elementary and high schools in the province on Monday, as the typhoon crossed the province.

The Ilocos Norte PDRRMC said strong winds shattered the glass windows of some provincial government buildings, but no major damage was reported elsewhere in the province.

It said major roads in Ilocos Norte were passable on Monday.

Provincial agriculturist Norma Lagmay said heavy rains and wind damaged rice, fruit and vegetable farms in Piddig and Pasuquin towns, which were due for harvest, but damage estimates have yet to be completed.

In La Union province, work was suspended at the provincial capitol in San Fernando City until Monday noon.

It was business as usual, however, at the San Fernando City Hall. Employees of national government agencies also reported for work on Monday.

Classes were suspended in all levels in San Fernando City and the towns of San Juan, Bauang and Agoo on Monday.

The San Fernando Disaster Risk Reduction and Management Council said 55 people in two villages were in evacuation centers as of 5 a.m. Monday.

Heavy rains that began on Sunday also caused knee-deep floods along the southern section of the national highway in San Fernando City.

In Isabela, which was also in the direct path of the typhoon, rains spared crops and left no fatalities.

In Bataan province, a family in Barangay Colo and 4 families in Happy Ville in Dinalupihan were moved out on Monday. Five families from Barangay Nagbalayong in Morong town transferred to Barangay Binaritan, also in Morong.

In Bulacan province, 25 families were evacuated from Barangay Salambao in Obando town to a school in the town on Sunday.

In Nueva Ecija province, residents in the Cabanatuan City villages of Acfa, Imelda, Sta. Arcadia, Barrera and D.S. Garcia were evacuated on Sunday.

In Pampanga province, 26 families were moved out of the landslides-hit village of San Juan Baño in Arayat town.

The Bongabon-Baler Road in Villa Maria, Aurora, was not passable to all types of vehicles because of a river’s high water level there.

In the Cordillera region, the Office of Civil Defense (OCD) said landslides shut off traffic through Kennon Road in Baguio City, and the Shilan-Beckel Road and the Asin-Ngangalisan-San Pascual Road in Benguet province.

In Apayao province, the PDRRMC reported losses in rice and corn farms and banana plantations in Pudtol town.

Janet Armas, Cordillera regional director of the Department of Social Welfare and Development, said 158 families Benguet, Kalinga, Mt. Province and Apayao were evacuated before the typhoon crossed the region.

Landslides along Naguilian Road in Baguio City, and roads through Benguet, brought down power lines, which caused power interruption in sections of Baguio and the Benguet towns of Bakun, Kibungan and Itogon, according to the Benguet Electric Cooperative (Beneco).

The utility expected to restore power to affected Baguio neighborhoods by Monday night, but Beneco said it would await government road crews to clear some roads in Benguet before its personnel could fix toppled power lines.

Power outages were experienced in some parts of La Union early Monday.

National Grid Corp. of the Philippines said power was being restored in parts of La Union and parts of Sison and San Fabian towns in Pangasinan after the Sta. Rita-San Fabian 69-kilovolt line that tripped at

At press time, Ilocos Norte’s power supply was back to normal in the province’s northern towns like Pasuquin and Pagudpud, portions of the towns of Paoay, Currimao, Banna, Pinili and Marcos.

Binga Dam and Ambuclao Dam in Benguet and San Roque Dam in Pangasinan had not released water despite rains in these provinces on Sunday and Monday.

Eugene Cabrera, head of the Mimaropa Disaster Risk Reduction and Management Council, said a classroom in Barangay Tubili in Paluan, Occidental Mindoro, was damaged by a landslide on Sunday.